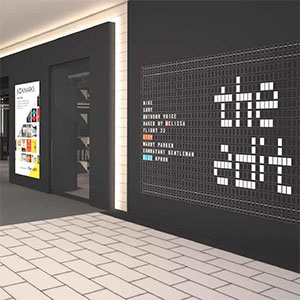 Pop-up shops—temporary retail stores designed to drum up consumer excitement and brand awareness—may be the biggest trend in retail this holiday season.

Established and startup brands are turning to the fun, ephemeral retail concept, launching vibrant pop-ups in locations cherry-picked in large part through the unshakable arithmetic of their online sales data.

Amazon, which has long leaned on the pop-up to test new markets, products, and retail innovations, is debuting five pop-up shops inside Whole Foods stores this season, adding to its already huge stable of rotating temporary stores.

Amazon employees will staff the locations, which will open in suburban California, Colorado, Illinois, Michigan, and Florida. Shoppers will be able to test-drive Kindles, Amazon Echo, and other devices.

AuRate, the e-commerce fine jewelry brand that’s in mega growth mode, debuted pop-up stores Nov. 5 in New York and Washington’s Georgetown neighborhood and will pop-up in Boston Nov. 20. (My Retail Details blog post tomorrow will feature an interesting interview with the cofounders, who dish on their brand’s out-of-the-box retail plan.)

Toys R Us has debuted a pop-up for the season near Times Square in New York City. And just down the street from that, on the corner of 42nd Street and Seventh Avenue, Sharper Image has popped up with an airy, two-story space where shoppers can watch bot cars battle and demo dozens of electronics.

Within its own properties, mall owner Simon Property Group has debuted The Edit, a retail concept that rotates different brands through cordoned-off spaces that range from 20 to 200 square feet throughout the year.

Brands that have signed up to rotate at the first Edit, at Roosevelt Field mall in Garden City, N.Y., include dessert-maker JARS by DaniRaden, luggage label Smart Luggage, beauty brand Winky, and art gallery Uprise Art.

Of course, the pop-up shop, which is at its core a store with a short lease, is no fleeting trend.

For innovative retailers including Amazon, pop-ups have become a core strategic component—beloved as quick, low-investment tools to test the viability of new markets and products (quickly) and stoke consumer enthusiasm.

Ephemeral stores as a format are certainly here to stay. And they may be beating a rare path forward for ailing brick-and-mortar retail.