You’ll hear JCK editor-in-chief Victoria Gomelsky and news director Rob Bates talk with guest Casey Melvin, cofounder and co-CEO of the Future of Jewelry. She’ll be describing what the company she and her sister started offers and how it’s different from traditional jewelers.

Show Notes
00:30 Victoria and Rob introduce their guest, Casey Melvin.
07:08 Casey describes the Future of Jewelry platform.
10:20 Casey talks about how she differentiates her company from those of traditional jewelers and describes her consumer.
13:05 Victoria asks if the Future of Jewelry has had any investors, and Casey describes the types of rings consumers can create on the company’s website in greater detail.
20:30 Rob asks Casey what the future of her company looks like.

Victoria and Rob introduce their guest, Casey Melvin, cofounder and co-CEO of the Future of Jewelry. Casey entered the jewelry industry in 2016. Before that, she was in law school. It was during law school that she studied abroad in the United Kingdom with her sister. One weekend in Spain, they were looking for a piece of jewelry to mark their trip to the country. She found a signet ring that she loved and wanted to surprise her sister with one—but the rings were either extremely expensive, or extremely cheap. From there, they both got into 3D printing for their own brand of customizable signet rings.

The Future of Jewelry Platform

Casey tells the JCK editors a little bit about the platform the Future of Jewelry uses that allows buyers to design their own ring on its website. You don’t have to be a designer in order to create your signet ring. You can choose the band, engraving, and kind of metal, all of which helps you make a ring that’s completely unique and personalized. If you have access to a 3D printer, you can also buy a design file of the ring you design and 3D-print the piece yourself. 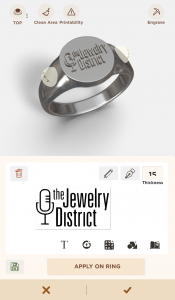 How the Company Stands Out

Victoria asks how Casey’s platform fits in to the world of more traditional jewelry. She believes that her company stands out as it democratizes jewelry at a lower price point. She wants her consumer to be a part of the design process. She says she imagines the Future of Jewelry buyer to be in their 20s or 30s, someone with a bit of disposable income, who wants a piece that stands the test of time. Casey says the company has attracted a lot of customers by word of mouth, and she wants to create direct relationships with her customers.

The Ring and Company Inventory

Victoria asks Casey if the company had any investors, and Casey answers that it’s just been her and her two sisters (though she received some advice from Mark Cuban: He told her to keep the company in the family, advice that she took to heart). As for the ring itself, you can engrave it with a monogram, roman numerals, icons, dates, geographical locations, and more. Victoria asks if this kind of personalization is coming soon to other companies—Casey doesn’t think so. She also believes more companies should digitize their inventory. When the Future of Jewelry started, it had a digital inventory, so she and her sisters didn’t have to put up a huge amount of money upfront. 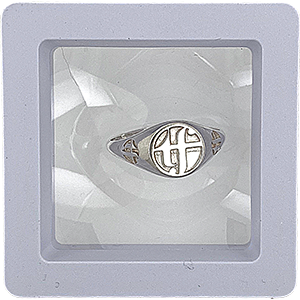 In 2018, the Future of Jewelry became a web-based product. It would have had to pay out 30% of all in-app sales to Apple to be in its App Store, which just didn’t make sense for the company’s business model, so it’s web-only. Rob asks Casey what the future of her company is—she wants to focus on consumer education and expanding her company while condensing her supply chain. She would also like to shorten the time it takes for consumers to receive their rings, which is currently three weeks from the time an order is placed. Rings start at around $90, but can go up to $250 and beyond depending on the type of metal and design choices.