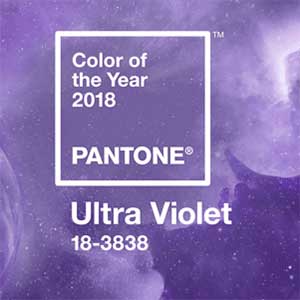 Pantone has named Ultra Violet the color of the year for 2018.

It is also “a spiritual, cosmic hue [that] pushes the boundaries of what inspires us to look upward and outward to the future,” a statement said.

The color of the year, which has proved to have broad influence in both fashion and jewelry, was chosen by the Pantone Color Institute using trend forecasts and color psychology.

But perhaps those experts were also reading JCK: In our 2018 forecast, we predicted that purple would be the color of the year.

Two years ago, in a break with the longstanding tradition of choosing a single shade, Pantone chose a blending of Rose Quartz (light pink) and Serenity (light blue) as color of the year. The Institute ascribed its 2016 choice both to consumers’ search for “mindfulness and well-being” in a stressful modern world, as well as a widespread “gender blur as it relates to fashion” that would be reflected by such an unconventional color association In spite of the ongoing turbulence of our times, Ultra Violet, while forward-looking and ethereal in its connotations, seems to reestablish the tradition of a single color choice.

Worth noting, too, is that yellow has not made an appearance more than once this century. Mimosa, a darker yellow leaning toward an ochre shade, made the grade in 2009, but the color is not a common or traditional choice.

Jewelry designers who are followers of the sun will have to look backward to Van Gogh’s fields of flowers or his Starry Night, because Pantone’s color experts are not likely to hop all the way across the color wheel to opt for purple’s complement anytime soon.