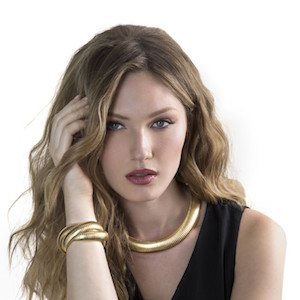 Following the Federal Trade Commission’s decision last year to remove the traditional thresholds on what can be described as gold, a new line has been introduced based on 1k gold jewelry.

Gold One Jewelry is now being sold on QVC and at Daniel’s Jewelers, and will be soon be sold at Macy’s, Kohl’s, and Boscov’s, according to its creator, Long Island City, N.Y.–based Select Jewelry.

The jewelry was created using a new patent-pending gold alloy. It is then plated with a layer of 14k gold to match the color of traditional gold jewelry. Its retail price is 80%–90% less than comparable 14k product, the company says.

Prior to the August 2018 revision of the FTC Guides, manufacturers could not describe a product as gold unless it was at least 10k.

The new Guides eliminated the karatage threshold for gold, though the FTC specified that the karatage must be clearly and conspicuously disclosed.

“Maintaining a 10k [gold] threshold does not guarantee that only products marked and described as gold are ones that meet a particular level of performance,” wrote the FTC in its Statement of Basis and Purpose.

Critics, such as Mark Hanna, chief marketing officer of Richline Group, called this a mistake.

“The idea of calling something gold when it has low amounts of gold could create severe confusion,” he said. “1k gold won’t be the kind of product that lives up to consumer expectations.”

But Ronny Seliktar, president of Select Jewelry, says the 14k plating gives his product many of the same qualities as higher-karat gold.

“It protects from tarnishing for a sustained period,” he says. “It looks the same, it feels the same. If you look at the market, 14k reacts differently than 18k. And so does 8k and 9k. And 1k certainly behaves differently.”

He says consumers will be attracted to the lower price point.

“We feel this FTC [ruling] will put gold in the forefront again, make it popular again,” he says. “Over the years, as the gold price has shot up, a smaller segment of the market can afford gold. A lot of designers have abandoned the gold market for base metals. We are looking to bring back the price points when gold was a best seller.”

Still, some will argue that something with such a small amount of gold shouldn’t be considered the “real” deal.

“10k gold is real gold, and so is 14k,” says Seliktar. “1k gold is mixed with alloys, just like the other karatages.”

He notes that, in Germany the threshold is 8k gold, and in the United Kingdom, it’s 9k.

“People who can afford 14k gold will still buy that,” he says. “Millennials and Generation Z love gold, but they can only buy what they can afford. They can now buy 1k gold, and it will be their first gold. As they grow and as their income grows they will become gold customers. We think this is going to save the gold industry, not hurt it.”

(Image courtesy of Gold One)