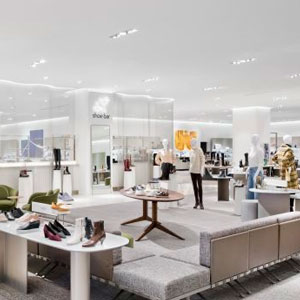 You wouldn’t think that Maria Tash, the edgy New York City–based piercer and jeweler, had anything in common with Nordstrom, the comparatively tame Seattle-based department store that’s opening its first-ever flagship in NYC tomorrow.

But Tash has her very own selling spot in the 320,000-square-foot store at 225 W. 57th St., which the company says will fuse classic luxury (Fendi, Chanel) with more of-the-moment brands such as Tash, e-commerce phenomenon Everlane, and trendy beauty brands Hum and Moon Juice. The strategy is designed to bring younger buyers into the sprawling brick-and-mortar.

The jewelry mix at the store will also include European jewelry brand Atelier VM, which is famous for chain bracelets that are soldered onto wearers’ wrists, a service the new Nordstrom will offer to jewelry lovers.

Jewelry isn’t the only category where the Seattle-based retailer is experimenting. Pop In @ Nordstrom, located on the fifth floor, is a space meant to revolve red-hot companies—primarily direct-to-consumer brands—every few weeks. Everlane will be the first to inhabit the space.

The new Nordstrom has been seven years in the making and opens at a time that’s indisputably dicey for department stores.

Barneys New York—Manhattan’s favorite luxury retail temple—filed for bankruptcy in August. Saks Fifth Avenue’s owner Hudson’s Bay Co. is going private and has been closing stores, including Saks’ downtown women’s store. It sold off Lord & Taylor, which has been experiencing declining sales for several seasons, to e-commerce entity Le Tote at the end of August.

Still, Erik Nordstrom told reporters at a store preview Monday, according to CNBC, “This is a big, exciting moment for us…. Everything that comes to New York has to be at a standard that’s our best ever. This building…we think is super relevant to customers and how they want to be served today.”

Top: Inside the new Nordstrom in Manhattan, which opens tomorrow (photo courtesy of Nordstrom)