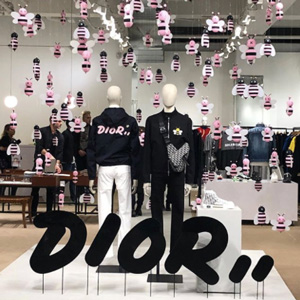 As part of a dramatic streamlining that includes plans to shutter 16 of its full-line stores this year, Nordstrom has decided to close its three freestanding Jeffrey designer boutiques, which are located in New York City, Atlanta, and Palo Alto, Calif.

The department store bought a majority stake in the Jeffrey chain, which specializes in high-end designer brands such as Givenchy, Saint Laurent, and Balenciaga, in 2005—and at the time also brought on its founder, Jeffrey Kalinsky, to help build out Nordstrom’s designer fashion category.

The first Jeffrey store opened in 1999 in New York City’s Meatpacking District. At the time, the neighborhood wasn’t hip or cool, but Kalinsky saw its potential, and a lineup of high-end designer shops (and an Apple store) followed Jeffrey into the neighborhood, which is now one of NYC’s most popular shopping districts. Jeffrey’s third store, in Palo Alto, opened just two years ago.

Kalinsky’s know-how and good relationships in the designer fashion space helped shape the buys and merchandising in Nordstrom’s higher-end units, where the retailer cultivated a reliable clientele of affluent, often suburban, women over the past 15 years.

“There’s always been a tremendous synergy between Nordstrom, Jeffrey Kalinsky, and his successful luxury specialty stores,” Pete Nordstrom told WWD, adding that Kalinsky “developed a more comprehensive designer offering across all categories—shoes, handbags, accessories, and ready-to-wear for men and women. He helped us secure new distribution. He leaned in with buying teams to help us improve our edit and selection. His presence in the market alongside our buying teams helped validate our place as a designer destination. Jeffrey brought tremendous creativity, innovation, and expertise that have been invaluable to us as we’ve worked to establish and expand our designer offering. We’re grateful for his leadership and many contributions to the company.”

The demise of Jeffrey store is the latest in a series of closures and bankruptcies that have hit the high-fashion sector recently, including Neiman Marcus’ Chapter 11 filing, and—before the COVID-19 pandemic—Barneys New York’s sale and dissolution last year, and seminal fashion boutique Opening Ceremony’s shuttering in January.

Kalinsky wrote on Instagram, “While this decision is disappointing, we understand it’s a necessary step given the significant business impacts of this crisis…. Thank you for letting me and us be a part of your lives for the past 30 years.”

Top: A Dior display inside a Jeffrey store in January (image via @jeffreykalinsky)