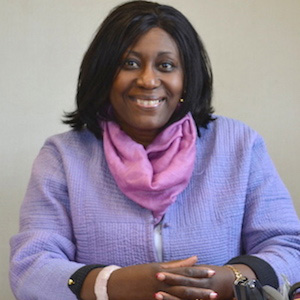 We have heard many lab-grown sellers talk about the ethics of their products. And we have natural diamond companies’ rejoinders to those claims.

But we don’t often hear from the people who actually work in diamond mines and fields, whose living depends on diamonds.

For Dorothée Gizenga (pictured), executive director of the Diamond Development Initiative (DDI), that crucial voice is missing. Her group has long advocated to improve conditions in the diamond fields.

In a statement her group issued last month, the DDI professed unease that lab-grown diamonds are now marketed as “ethical.” Gizenga worries that if diamond mining disappears—which some now actively hope for—it could have potentially horrific consequences for millions of people in some of the poorest countries in the world. It would be even more ironic if such catastrophic events occurred in the name of “ethics.”

“Artisanal diamond mining is the livelihood of millions of people,” Gizenga says. “They have an average of 10 dependents, including children. That is a significant amount of people depending on this industry. For them, that is the only livelihood that is available.”

These concerns are sometimes flippantly, or even callously, dismissed by lab-grown manufacturers. But they are real, they are not abstractions, and can’t be simply rationalized away.

Gizenga comes from NGO Partnership Africa Canada (now IMPACT), which was one of the original groups that publicized the blood diamonds issue. She is well aware of the dark side of diamond mining.

But she also says her group has made real progress in the diamond digging areas. It has developed the Maendeleo Diamond Standards, which lay out ways to improve working conditions and mitigate environmental impact in the diamond fields. A new pilot with Gemfair helps get miners better prices for what they find.

“The miners are actually eager to have better working conditions,” she says. “They are very thankful for it.

“It doesn’t make sense to eliminate diamond mining but to invest and improve it. The best way to support change is to first know that change is possible. In the past, many believed that this is a hopeless situation, as people have been mining this way for over 100 years. We are proving it is not impossible. It’s not hopeless. It is very hopeful, when the right investments are made.”

As for the argument that lab-grown diamonds are more eco-friendly, she admits that diamond mining has an environmental impact.

“But there are ways to mitigate that impact,” she says. “The question is how to deal with Mother Nature in a way that you can restore the environment. Right now, the diamonds are being produced in a lab on a small scale so there is no environmental impact. But when the technology allows mass production, we don’t know what the impact will be. There is no analysis besides the companies’ claims.”

(I would also argue that recycled diamonds are a more eco-friendly product than lab-grown diamonds, which require factories to produce.)

Now it’s true, some lab-grown companies do donate to charity. But even sizable donations won’t match the impact that will be created by the end of mining.

Ideally, both the man-made and natural sectors would use ethics not as a marketing tool or a weapon, but as a guiding principle to improve their supply chains and their standards.

Gizenga feels that anyone in the market should ask about the origins of their diamonds and the conditions under which they are created. But she also thinks the current debate is way too narrow.

“Consumers need to be educated about the options that they have and the implications of their choice,” she says. “For us, the answer is not to buy natural diamonds. But help to make every diamond an ethical diamond.”