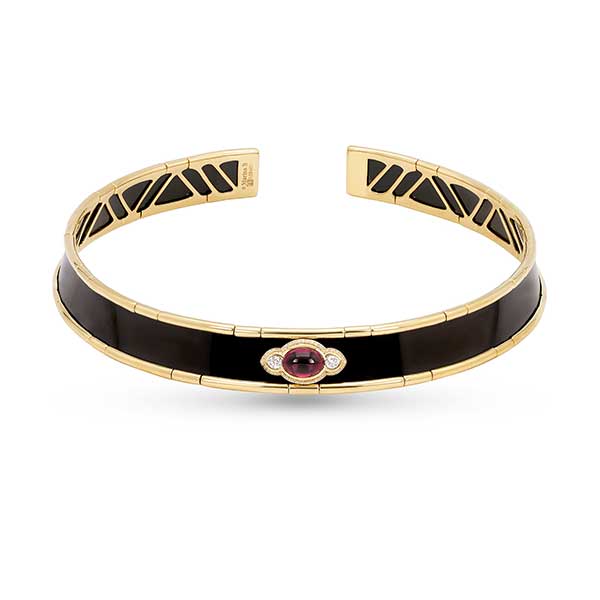 I always like to think of Marina B as the Christine McVie to Bulgari’s Stevie Nicks, and two new collections have popped up since our most recent coverage of the storied Italian brand last fall.

Titled Simona and Trina, respectively, the new collections reflect the vision of creative director Guy Bedarida, who assumed the role, as well as that of the house’s majority owner, in 2017.

Both are a great example of his mission to honor, but also reimagine, the design codes established by Marina Bulgari, who founded the brand in 1976.

The well-preserved design archives have been a gold mine of inspiration points.

“Simona today is still recognizable as an iconic Marina B design but definitely has a lighter look; it’s easier to wear, more petite in scale in order to be more wearable,” says Bedarida, who previously held creative leadership roles at John Hardy and trained on the Place Vendôme as a designer at Van Cleef & Arpels and Boucheron. “There is also an evolution in the material as we use titanium for a better spring memory and to make it lighter weight.”

As for the Trina, (Italian for lace) Bedarida looked to very iconic 1980s designs by Marina Bulgari, including the Rosemarie necklace (1985) and the Cristina necklace (1981, pictured below).

“The concept was to translate these two strong, colorful, and very bold designs to create a delicate, diamond look for the new generation of today,” says Bedarida. “It was very important that it still speak to the Marina B heritage.”

As such, Trina embraces the Marina “chestnut” silhouette in a modern way, casting it as a delicate, playful openwork motif.

“Trina was one of the first ideas that I had when starting to design the next generation of the Marina B brand,” says Bedarida. “It was three years ago. I was not yet the creative director, [but] I wanted to figure out: Is there a way to make the brand younger and more relevant to millennials? And the answer was yes.”

And from the look of things, we’re inclined to agree.

Top: Marina B’s iconic Simona design for a new era. The limited-edition Simona collar is made in titanium and 18k gold with rhodolite garnet and diamonds, price on request.