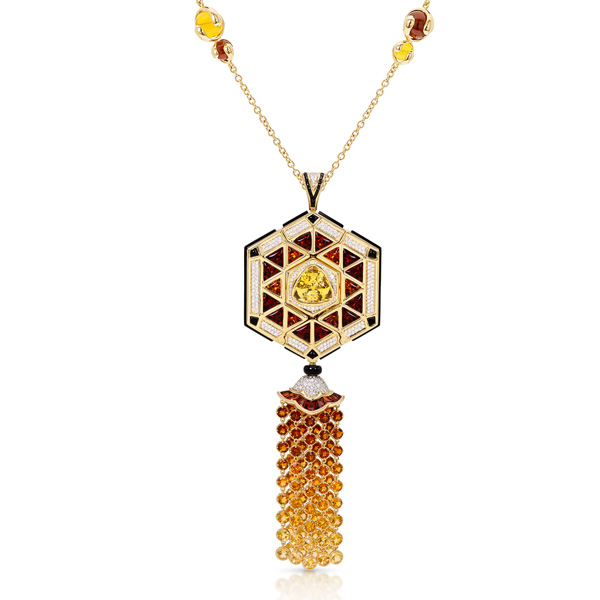 It feels as if the power of citrine goes unnoticed—or at least, unnoted—until November rolls around. As one of November’s birthstones, the golden yellow-orange gem is wonderfully evocative of the season.

There are myriad jewels that make use of citrine in the most beautiful ways—look for a collection of them to be shared on this space later this week—but not to provide this one creation in particular its own dedication would be regrettable.

From Italian jeweler Marina B, the Emilia pendant is what autumn dreams are made of. If the best display of autumn leaves had been pressed into a collection of gemstones and then gathered into one, über-wearable amulet, this would be that amulet. This is Thanksgiving sponsored by jewelry. This is your September, October, and November all rolled into one neat package. This is wonderful.

Emilia is actually a selection of citrine and yellow sapphires, artfully set in two distinct elements that make up one piece, also adorned with black spinel and diamonds. The black spinel is a nice touch—it serves up a smokiness that has the orange, red, and yellow color scheme feeling heartier than a willowy gathering of leaves. It isn’t overflowing with black spinel, but the addition of the stone makes the pendant appear rooted in it, and it’s more powerful because of it.

At the dead center of the pendant’s hexagonal station is a natural, unheated trillion Ceylon yellow sapphire, just under 15 carats. That’s enough to make an impressive pendant all its own, but thank goodness the designer didn’t stop there. Orange citrine triangles are arranged in a wreath around the center stone, lending a stained-glass appearance to the shape, a tribute to all that is good and gemmy.

My favorite part—and quite a wallop of an addition—is the (detachable!) cascading waterfall of round citrine gemstones in an ombré color pattern that creates movement even when standing still. Each gemstone is bezel set, encased in a ring of gold that douses the design in even more warmth than its fiery color scheme provides.

The only thing that would make this pendant any better is to see it on a thick, shimmering gold chain, thereby doubling its statement status, though the chain it comes on—a necklace befit with gemstone orbs of maroon and gold—is no slouch.

Each year I like to imagine I get one special Thanksgiving jewel, and this marks my pick for 2019. Imagine wearing this around your neck on Turkey Day—that holiday would be memorable (and complete) even without the meal.

The New York-based Guy Bedarida took over as creative director and designer for Marina B in 2017. The brand, founded in 1976 by Marina Bulgari (yes, that Bulgari), recently opened the Marina B Salon on 67th and Madison in New York City.