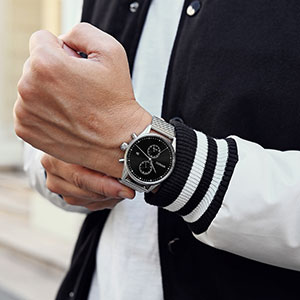 Movado Group has acquired MVMT, a direct-to-consumer watch brand that is aimed at—and was founded by—cost-conscious 20-somethings. The total price could reach $200 million.

Movado has agreed to make an initial payment of $100 million, as well as two future payments that could total as much as $100 million depending on MVMT’s performance. The acquisition is expected to be final by October and will be funded by cash and Movado’s credit facility.

Founded in 2013 by Jake Kassan and Kramer LaPlante, who are now 27 and 26, respectively, MVMT achieved $71 million in sales in 2017. Its products, which also include sunglasses and other accessories, are primarily sold through direct-to-consumer e-commerce, as well as in a handful of retailers, including Nordstrom and Bloomingdale’s.

Both Kassan and LaPlante will continue to head the Los Angeles–based company. Kassan serves as CEO, and LaPlante is chief operating officer.

That 140-year-old Movado has purchased MVMT is somewhat ironic considering MVMT’s site expresses disdain for its “antiquated” watch competitors. According to its official origin story, the two founders were frustrated that it cost at least $300 to buy a watch at a department store. They came up with the idea of a watch brand with prices starting at $95.

When the company was launched via Indiegogo, it became the most successful campaign in that site’s history, netting $290,000.

According to The New York Times, 88 percent of MVMT’s customers are under 34 years old, and 45 percent are under 24.

“We’ve both always been passionate about watches,” LaPlante told Forbes, “But none of the existing brands resonated with us or our friends in a fashion-forward millennial way. It’s not that millennials don’t like watches. It’s that what was available was overpriced, marked up, and the brands weren’t things that we really felt we wanted to get behind.

“The big watch conglomerates are struggling to do what we do, especially with millennials,” he added. “No one’s ever done what we’re doing in the watch business before in terms of building an affordable, accessible brand. We’re also the first ones to go to market totally online, and we’re hitting the millennial market through social media that’s hard for outdated brands to be relevant with.”

In its statement, Movado said the purchase will boost the company’s digital strategy, increases its exposure to millennial consumers, and presents a significant growth opportunity. MVMT will also benefit from Movado’s global infrastructure and distribution network, it said.

This is the second time in two years Movado has purchased a younger-skewing watch brand. In 2017, it paid $77.5 million for Olivia Burton, an accessibly priced watch and jewelry line.

Added Kassan: “We share many of the same strategies as Movado Group, including a focus on unique design, product innovation, and providing compelling value for the consumer.… Movado Group has the expertise and resources to help expand MVMT to many untapped markets around the world.”