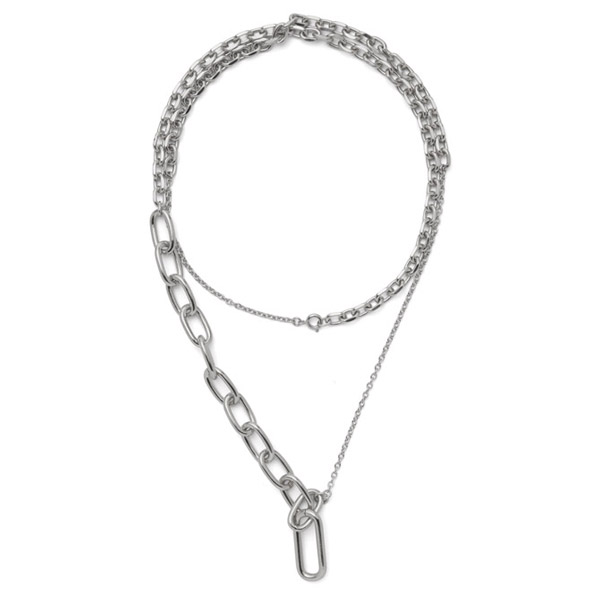 Paper clip chains are obviously having a moment. Two of my colleagues recently reported on them: Emili Vesilind shared the style as a must-stock in the recommendation of Royal Chain, a chain authority if there ever was one; and Amy Elliott gave us a look at the Office Supplies collaboration from Jacob & Co. and Virgil Abloh, a remarkable concept considering most of us aren’t able to hoard office supplies at the moment.

These two examples alone are, in my book, proof enough that the style is trending, but a visit to Instagram cements it further. You can’t see a #neckmess without the style prominently featured, whether it’s draped among the layers of charms and medallions on its own or strung with a special pendant itself. I personally crave the short variations, a choker length, or an extra-long chain doubled up in two tighter rows.

Designers everywhere are popping up with versions of their own, from fine jewelers to fashion pieces, and consumers are gobbling them up. On the Madewell site, there’s a style made in gold-plated brass going for $38 that’s back ordered until mid-May.

But this is a style deserving of some relative investment, for shoppers who are able. It’s experiencing a revival as it is, popular in the ’80s but dating back to as far as the Victorian era in relative shape (the Victorian belcher chain could possibly be considered inspiration for later versions, as the paper clip itself was actually invented in 1899, in the final years of the Victorian era, and I’ve seen lots of antique watch fobs exhibit this shape too). Fashion label Maison Margiela sold a necklace made of paper clip links as a part of its autumn/winter 2007 collection, and Kris Jenner tried selling consumers on the idea back in 2016, but the style didn’t explode then like it is now.

There are two kinds of paper clip styles, generally: literal paper clips, taking on the shape of the (I guess, underappreciated?) office supply, as in the Jacob & Co. x Virgil Abloh collab, and the paper clip link chains, as referred to by Royal Chain. They’re both trending—some designers are putting their spin on styles that would make Sesame Street‘s Bert reach for his wallet (he really, really loves paper clips)—but it’s the subtler series of chains that seem irresistible at the moment. Any group of necklaces seem incomplete without its presence.

In addition to necklaces, the popular chain style is being replicated to great success in bracelet and earring styles, too, and garnering loads of love.