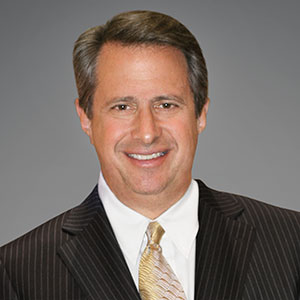 Michael Pollak (pictured) is stepping down as chief executive officer of Hyde Park Jewelers, the 10-store retailer that he cofounded in Denver in 1976.

Pollak will continue to serve as the retailer’s nonexecutive chairman. He and wife Shereen remain the company’s sole shareholders.

Shereen will continue to serve as president so she can continue serving her clients of 40 years, she says.

Pollak has served as the company’s CEO since 2007, when cofounder Steven Rosdal retired.

Damon Gross (pictured below), the company’s chief operating officer, will step into the CEO role beginning Jan. 1. He has been the company’s COO for 14 years.

Pollak tells JCK that his stepping down shouldn’t be looked at as a “retirement. It’s a pivot. Shereen and I have come to the realization that what we’ve created has reached our initial set of goals. We will focus on other businesses that we have, as well as other things that give us pleasure in life.”

He says that he is more than happy to turn the business over to Gross, who before he joined Hyde Park was the corporate vice president for the jewelry and watch retail division for MGM Mirage.

Pollak has long been active in the industry. He is currently a board member of the Diamond Empowerment Fund and the Natural Color Diamond Association and is a former board member of Jewelers of America and former president of the Luxury Jewelers Resource Group.

In 2017, the Women’s Jewelry Association awarded him its Ben Kaiser Award, given to a man “who supports female leaders in the industry.”

For the future, he plans to stay active in nonindustry philanthropy, particularly the Diamonds in the Rough Foundation, which he and his wife founded and focuses on health- and child-related causes in the areas where Hyde Park does business.

Pollak doesn’t expect to be attending any of the big trade shows in the future. “I intend to remain in the background, not the foreground.”

Asked for any thoughts on the industry, he says that jewelers have to be “fluid and nimble.

“It’s a challenging environment for jewelers to navigate and survive. You have to adjust to the marketplace. Where we have been successful as a company and a team, it’s been when we made those adjustments. And to the extent that you do that, you have the opportunity to not only survive but to grow.”