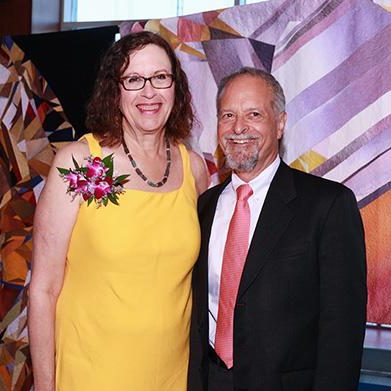 Gardner (pictured, right, with husband Dan Feldman) was given the group’s Lifetime Achievement Award for her 17 years heading the Jewelers Vigilance Committee.

In her speech, Gardner noted that she often found herself the only woman in the room during discussions of industry issues, and that puzzled her, given the industry’s primary customer is women.

She then told the men in the industry they have a choice.

“You can choose to put a woman in the room, you can take a woman with you to your next negotiation,” she said. “And I urge you to make that choice.”

The association also awarded its first Cindy Edelstein Mentorship Award, named in honor the late Cindy Edelstein, a longtime WJA board member. That award was given to former JCK editor-in-chief Peggy Jo Donahue (pictured below), who in her speech expressed gratitude to the many men in the industry who had mentored her. 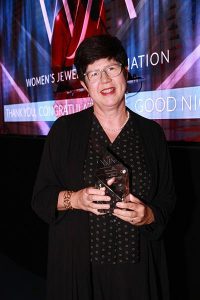 The Ben Kaiser Award, given to a man who supports women leaders in the industry, was awarded to Michael Pollak, CEO of Hyde Park Jewelers. The Corporate Award was given to New England–based Day’s Jewelers.

The group also awarded the following Awards for Excellence:

This year’s gala raised nearly $30,000 for the WJA Foundation’s 2018 scholarship and grant program.