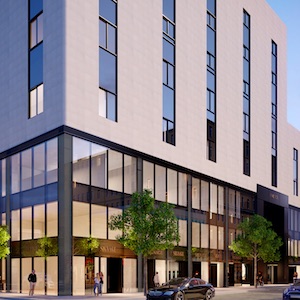 The developer, which purchased the 225,000-square-foot building two years ago, will rename the building Time Century.

The redesign, led by architect Kobi Karp, will feature a three-story atrium and four floors of luxury jewelry retail and wholesale space, as well as four floors of offices. It will also include valet parking service.

The revamp of the property, located at 1 NE First St., is due to be completed in 2022. The retail space is already 50 percent pre-leased, the developer said.

The Miami jewelry district claims more than 300 jewelry stores in a four-block radius, which together generate more than $850 million in sales annually.

“Time Century marks a new beginning for one of the largest jewelry districts in the country that continues to grow in importance,” said Time Century Holdings managing director Dan Deutsch in a statement.

He predicted the new building “will be the premier destination for luxury jewelry retailers, wholesalers, consumers and watch enthusiasts.”

In other Miami news, the U.S. Antique Shows have moved the date of next year’s Original Miami Beach Antique Show by two months.

The show, originally set for January, is now scheduled to run from Friday, March 12, to Tuesday, March 16, 2021, at the Miami Beach Convention Center.

The change was made because of continued concerns surrounding the COVID-19 pandemic, including restrictions on international travel as well as large-group gatherings.

The 57-year-old Antique Shows are owned and operated by Emerald Exhibitions.

The show is one of a number of January 2021 jewelry events that are being rescheduled or canceled owing to COVID-19, including the annual 24 Karat Club of New York banquet.