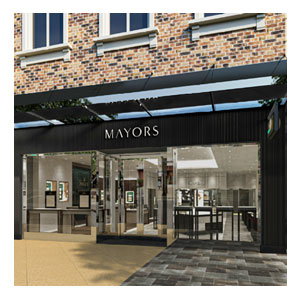 Fine jewelry and luxury watch retailer Mayors announced Tuesday that it will open its second location in Georgia on Feb. 11—inside a $1 billion mixed-use community in the city of Alpharetta, Ga.

The retailer has signed a lease on a 2,200-square-foot space in the 86-acre Avalon property that will include a stand-alone Rolex boutique. In addition to Rolex, the shop’s watch selection will include Tudor, TAG Heuer, Ulysse Nardin, and Grand Seiko—with Ulysse Nardin and Grand Seiko exclusive to the new location. Fine jewelry brands will include Messika and Roberto Coin, which has created a series of one-of-a-kind pieces with the retailer to celebrate the store’s opening. The Alpharetta Mayors boutique will also boast displays dedicated to the retailer’s own collections: Mayors Bridal and Mayors High Jewelry.

Mayors was acquired by the Watches of Switzerland Group in 2017, and the new location is Mayors’ fourth store to open following its official relaunch last year. The retailer is heavily focused on the Southeast, where Mayors has been rooted since its founding in 1910. Since the relaunch, the company has opened stores in Atlanta and Miami.

Watches of Switzerland is the United Kingdom’s largest multichannel luxury watch retailer, and it has used the Mayors and its own brand names to grow aggressively in the United States in the past two years. With this next opening, the company will operate 15 Mayors stores and one Rolex boutique in the United States. In the U.K., the retailer runs 120 stores, including ones from legacy jewelers Goldsmiths and Mappin & Webb. (See a recent JCK interview with CEO Brian Duffy here.)

David Hurley, executive vice president of Watches of Switzerland Group, said in a statement, “As we continue to expand and strengthen our presence in the Southeastern United States, our goal is to continue developing a loyal customer base.”