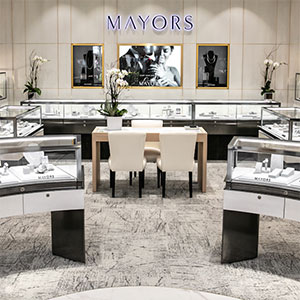 Legacy jewelry and luxury watch retailer Mayors has opened the first flagship store boasting its new store design in the Shops at Merrick Park, a shopping center in Miami-adjacent Coral Gables, Fla. The shop’s design will be reproduced in Mayors flagships moving forward.

The new store is part of the second stage of the retailer’s 2017 relaunch courtesy of Watches of Switzerland Group (then known as Aurum Group Ltd.), which acquired Mayors in 2017 from Birks for $104.6 million.

And Watches of Switzerland CEO Brian Duffy told JCK news director Rob Bates last month that the company plans to “redo all the Mayors stores,” adding, “We have a new look for the logo, a new look for the stores, a new in-store presentation. It has a great heritage, but you have to deliver it in a more relevant way. The big trend in today’s jewelry is toward brands. It is very important that Mayors is seen as a brand, not a big private label, but as a brand that you want to want to emotionally get associated with, which has style, character, and personality.”

Debuting with the store is a capsule collection from Miami-born and New York–based jewelry designer Pamela Love, created in collaboration with Mayors (the Merrick Park flagship will be the only Mayors to carry the collection of one-of-a-kind pieces).

The store also bowed with an exclusive-to-store capsule collection from Roberto Coin and a display of the high-end Regalia pearl collection by Mikimoto—which was flown in from Japan specifically for the flagship opening and will be on display for a short time before making the return journey.

The store’s watch selection is stellar, as expected, and features the latest timepieces from Breitling, Cartier, Franck Muller, IWC Schaffhausen, Mont Blanc, Omega, Rolex, TAG Heuer, and Tudor, among others.

Top: Inside Mayors’ new flagship in Florida (all photos courtesy of Watches of Switzerland Group)