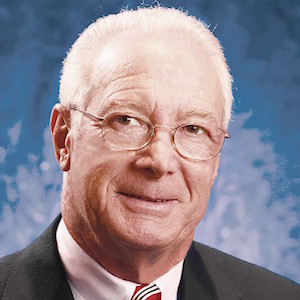 Born in Trenton, N.J., Siegel served in the U.S. Army Artillery in Germany in 1953 and 1954. In 1955, he joined his father as the second generation of his family to work at Hamilton Jewelers. He became its president in 1968.

Siegel’s store was among the first in the United States to order special Rolex timepieces from Switzerland with rare gem-set cases, bezels, and stone dials. He was an early advocate for several fledging designers before they become well known.

“[I]t was not uncommon for Mr. Siegel to assist a young person looking for an engagement ring, accept no payment, and with a handshake, allow the purchaser to leave the store with the ring and make subsequent payments ‘whenever they could do so,’” said a store statement. “Inevitably, he would gain a customer for life.”

It helped that he genuinely liked people.

“One of his favorite pastimes was to walk around town or the community and meet new people, and he always relished having even a small connection with a stranger,” said the statement. “He loved new ideas and innovation, which he encouraged with everyone he met.”

In 1994, he passed the role of president to son Hank, but continued to chair the company until his death. The store celebrated its 100th anniversary in 2012. Recently, Hank’s son Andrew joined the company as director of business strategy and operations, marking the fourth generation of his family to join Hamilton.

Siegel was an active philanthropist. For 18 years he served as a trustee at the Helene Fuld Medical Center in Trenton, and for 12 years as a board member of the United Savings and Loan Co. In 1984, he worked to found the Diabetes Educational and Informational Center at Princeton Hospital. In 1984, he received a citation from Trenton’s city council for his five-decade support of the city’s Little League. For 20 years, he sponsored foster children in Latin America and was particularly proud when they graduated from upper school.

In 2003, the New Jersey Senate and General Assembly passed a joint legislative resolution honoring Siegel for his “meritorious record of service and leadership.

“By his deeds and by his example, he has earned the respect and admiration of all who know him as a man of remarkable character and exceptional determination,” the resolution said.

Siegel is survived by Denise, his wife of 63 years; sons Hank, Jeffrey, Scott, and Peter; and seven grandchildren.

In lieu of flowers, the family requests that mourners donate to the Martin Siegel Community Fund of the Princeton Area Community Foundation or to Greenwood House in Ewing, N.J.