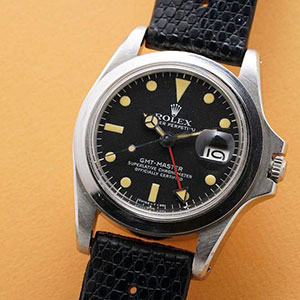 The ’70s-era watch bears a scrawled hand-engraving on its caseback, done by the actor himself, that reads “M. Brando.” It was on Brando’s wrist when he portrayed Colonel Walter E. Kurtz in Francis Ford Coppola’s epic Apocalypse Now.

Like the Paul Newman Daytona that sold for $17.7 million in 2017—setting a new high-price bar for a watch at auction—the whereabouts of Brando’s Rolex were in question for years. But Phillips reveals that it was in Brando’s possession until 1995, when he gifted it to his daughter Petra Brando Fischer following her graduation from Brown University.

Fischer relayed to Phillips that when her father gifted her the watch, it was with a note telling her how proud of her he was—and included the line, “This watch is like a tank. You can do anything you want to it and it will keep going. I want you to have it as a reminder of how proud I am of you.”

Fischer shared that her father told her the following story about the watch, during the filming of Apocalypse Now in the Philippines: Brando had been wearing the watch to set and was told to remove it so it wouldn’t stand out. But he refused, saying something along the lines of, “If they’re looking at my watch, then I’m not doing my job as an actor.” The filmmakers ultimately let him wear the watch, but Brando removed the bezel, which created an unusual-looking timepiece that became part of Colonel Kurtz’s memorable look.

“This Rolex GMT-Master is the holy grail of watches owned by Marlon Brando, and one of the greatest ‘long lost’ watches to finally surface after years of speculation,” said Paul Boutros, Phillips’ head of watches in the United States, in the same statement.

The historic Rolex will be offered as part of a sale called Game Changers that includes other timepieces formerly owned by as-yet-unnamed “extraordinary people.”

Top: Marlon Brando’s Rolex, to be auctioned in December (all photos courtesy of Phillips/Bacs & Russo)