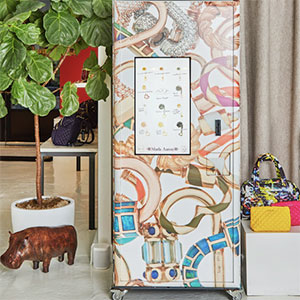 The machine debuted inside the store, its first retail partner, yesterday and will be there through Feb. 24. The brand says it’s meant to be a Valentine’s Day installation.

Part of that installation is an adorable short film, Love Is Everything, that machine users and lookie-loos alike can watch on the vending machine’s screen.

The brand conceptualized the video with creative agency Something Different. It shows young kids try to recite and make sense of William Shakespeare’s satirical Sonnet 130 (“My mistress’ eyes are nothing like the sun…”). The video ends with several kids saying “Love is everything” in quick succession. The kids are criminally cute, and the custom video has already caught the eye of AdWeek and other advertising and marketing watchers.

Here’s the video in full—it’s worth a watch:

“The film will be running through Valentine’s Day on our website, in our vending machine, and here, forever,” the brand states on its website. “We would like to touch as many people as possible with this message.”

Jewelry tucked into the vending machine at MZ Wallace was hand-selected by MZ Wallace cofounder Lucy Wallace Eustice and the designer. Prices for styles range from $125 to $1,496.50.