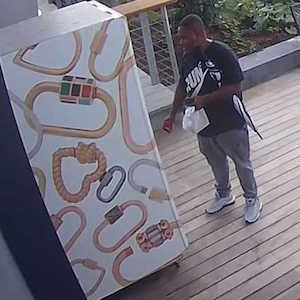 Unfortunately, that has proven all too true. On Sept. 20 at 1:15 p.m., a man (pictured) used fraudulent credit cards to purchase approximately $13,000 worth of jewelry from the machine. The New York City Police Department is now seeking his arrest for grand larceny.

“The risks are tremendous,” he says. “You have the risk not only of fraud but also of burglary. People attack ATM machines. What is to stop someone from attacking that machine and stealing all the goods? It would be like leaving materials out in your showcase overnight.”

According to the New York Daily News, the vending machine, which was originally stationed in the Brooklyn Museum, has now disappeared from its outdoor spot in Vale Park in front of the William Vale Hotel. It featured a fully automated touch screen as well as a video that told the designer’s story.

Aaron clearly had considered the crime angle, but told Brooklyn Paper that the machine was protected by security cameras.

“The park is locked at night, generally there’s lots of people in it,” she said, adding she didn’t expect anyone could walk off with it. “It weighs a ton—literally.”

The suspect is described as a black man, about 5 feet 10 inches, 220 pounds, last seen wearing a black T-shirt emblazoned with the word run and gray pants. Anyone with information regarding this incident is urged to contact NYPD Crime Stoppers.