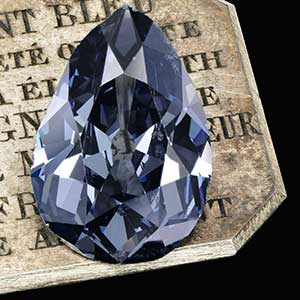 The Farnese Blue, a 6.16 ct. blue pear-shaped diamond that was owned by some of Europe’s most prominent families and the existence of which was unknown until recently, will appear on the market for the first time at the May 16 Sotheby’s auction in Geneva, the auction house announced today.

While the appearance of any ultrarare blue diamond on the market is a noteworthy event, what makes the appearance of this particular blue diamond even more unique is its royal provenance and the fact that it spent 300 years in the same family. That family kept the jewel in what is described as a “royal casket,” and until recently the stone’s existence was a closely guarded secret.

Like the legendary Hope and Wittelsbach diamonds, Sotheby’s says that the Farnese Blue “certainly” hails from the famed Golconda mines of India, one of the world’s first diamond sources.

According to Sotheby’s, the stone was first gifted to Elisabeth Farnese, the queen of Spain from 1714 to 1746 and a descendant of Pope Paul III, following her wedding to King Philip V of Spain, grandson of Louis XIV, king of France. In the 17th and 18th centuries, blue diamonds were viewed as the “ultimate royal gift,” according to Sotheby’s.

The stone was then passed down through four of the most important royal families in Europe: Spain, France, Italy, and Austria.

Among the many royals believed to have owned this gem is Marie-Thérèse de France, also known as “Madam Royale.” She was the first child of King Louis XVI and Marie Antoinette and the only one of the couple’s children believed to have survived the French Revolution.

The Farnese Blue will be exhibited at Sotheby’s Hong Kong from March 29 to April 2. This appearance will be followed by an international tour, with stops in London; New York City; Singapore; Taipei, Taiwan; and finally in Geneva for the auction.