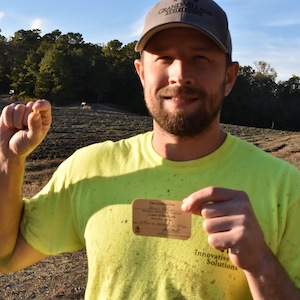 In a find that might strike some as spookily on point, a visitor to the Crater of Diamonds State Park found a 4.49 ct. yellow diamond—with a hint of orange—on Halloween.

And to make it even more appropriate, the diamond Steven McCool found is about the size of a classic Halloween candy, the jelly bean.

The Crater of Diamonds, based in Murfreesboro, Ark., includes a public area where visitors can search for diamonds and keep what they find. It’s the only park of its kind in the world.

In September, a visitor found a 9.07 ct. brown gem, the second-largest stone that’s been discovered at the park since it opened to the public in 1972.

McCool, 34, had visited the Crater four times before. Most times, he found nothing.

But this time, his eyes were instantly drawn to the little yellow gem.

“As my eyes were panning to it, I was thinking it could be an amber piece of glass like an old Coke bottle,” he said in a park statement. “Once I focused on it though, I knew it was a diamond. I was like, ‘No way! No way!’ ”

“It was very large, proud, and shiny,” he added. “There were others looking in that area, so if it would have been just a little closer to the surface, someone could have easily found it.”

He was so confident that he went up to the park weighing station and asked,  “Where do I register my diamond?”

In the park statement, Crater of Diamonds State Park assistant superintendent Meghan Moore called the diamond “stunning,” noting it seemed like it had great clarity.

McCool named his diamond the BamMam Diamond, after his 7-year-old son’s and 5-year-old daughter’s initials.

“What’s more precious than a precious gem?” he said. “My children. So, I named it after my children and the name will stay with the diamond forever. I called my son afterward and asked him if he remembered what Thanos’ Mind Stone looked like and told him I found one!”

The big question now: Will he sell or keep it?

“I’m torn,” he said in the park statement. “I’m somewhat sentimental. It’s my first diamond I found. I am the first person to unearth this, the first person to touch it. It’s hard to wrap my head around it. I am blown away by the clarity, the beauty, how rare it is. I’m definitely blessed, not lucky. It was the Lord’s work.”

(Photos courtesy of the Crater of Diamonds State Park)