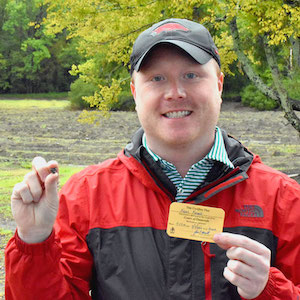 On Sept. 7, a persistent diamond hunter hit the jackpot at the Crater of Diamonds State Park when he found a 9.07 ct. brown gem, the second-largest stone that’s been been discovered at the park since it opened to the public in 1972.

The Murfreesboro, Ark.–based park is the world’s only diamond mine that lets members of the public search for gems and keep what they find. Kevin Kinard, a bank branch manager from Maumelle, Ark., had been a regular gem hunter there since he first visited on a second-grade field trip, but he had always gone home empty-handed.

However, on Labor Day, he found a marble-size “brandy brown” crystal with a rounded, dimpled shape and stuffed it in his bag.

“I just thought it might’ve been glass,” he said, according to a park statement.

He was so unimpressed by what he found, he almost didn’t have park officials check it.

“I didn’t think I had found anything,” he said. “My friend had hers checked, though, so I went ahead and had them check mine, too.”

A few minutes later, park officials informed him that he had a 9.07 ct. diamond.

“I honestly teared up when they told me,'” he said. “I was in complete shock!”

Kinard named his find the Kinard Friendship Diamond, in honor of the friends who have accompanied him on his many park visits.

Asked what he would give fellow searchers, he said, “Have the park staff check everything, because you never know. I would have never in a million years dreamed that I had found anything.”

The only diamond larger than Kinard’s that’s been found at the Crater of Diamonds since it became a public park is the 16.37 ct. white Amarillo Starlight, discovered in August 1975. Previously, the record for the second-largest Crater find was held by the 8.81 ct. White Star of Shreveport, unearthed in 1981.

(Image courtesy of the Crater of Diamonds State Park)