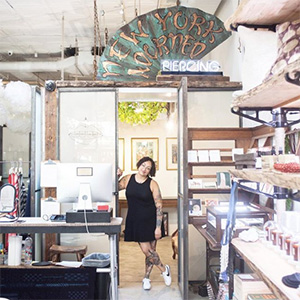 Lori Leven, founder and owner of the Love Adorned boutiques in New York City, Long Island, N.Y., and Santa Monica, Calif., announced this week that she plans to transform the iconic NYC tattoo studio she founded in 1996, New York Adorned, into a piercing gallery and showcase for custom jewelry design.

Leven wrote and posted a letter on the New York Adorned website in which she said she “no longer wants to own a traditional tattoo shop.”

The store will stop offering tattooing this month and will soon house “an expanded piercing experience and a custom jewelry world,” Leven explained. “I’m going to produce a reimagined piercing jewelry line I had in the early ’90s that I created with Don Purple called #WorldAdorned. A whole new perspective. Because let’s face it, the piercing jewelry world could really use a new perspective.”

Leven shared that as life has unfolded for her, she’s adopted a more nomadic lifestyle, and conceded that for a tattoo shop to be successful, “you need to be there all the time.”

She added, “The world of tattooing has been my life every day for more than 30 years. It has undoubtedly formed who I am as a person—good and bad. It has taught me to strongly follow my vision, no matter what the outside world says. It taught me the more you give, the more you get. It’s also taught me a few hard and painful lessons.”

But the innovative retailer won’t bow out of the tattoo world entirely. She plans to maintain the small guest tattoo shop she keeps in a space upstairs from the Love Adorned store in Santa Monica, Calif. “That way,” she says, “I don’t miss all of my homies. I’m super excited for this new incarnation.”