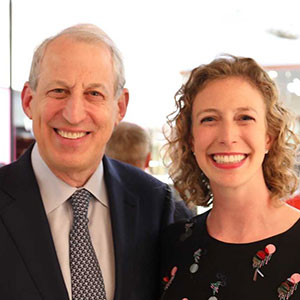 Lisa Bridge, who was appointed president and chief operating officer of Ben Bridge Jeweler one year ago, has now been appointed the retailer’s CEO.

She takes over for her father, Ed Bridge, who will retire as the company’s chairman and CEO on Jan. 31, 2019. The chairman role will not be filled at this time, though Lisa Bridge will join the company’s board.

Jon Bridge, who for years served as co-CEO with his cousin Ed, retired last year.

Lisa Bridge, 33, is the fifth generation of her family to run the 95-store chain and its first female president and CEO. She recently oversaw a redesign of the company’s stores that will eventually be rolled out to the entire chain. The remodel features an open layout with greater emphasis on educational elements, including moving the company’s craftsmen to the front of the store so that customers can watch them.

Ed Bridge first joined the family business, named after his grandfather Ben, the Monday after he graduated from the University of Washington in 1978. He was appointed co-CEO along with Jon in 1990. Ten years later, he and Jon oversaw the then-63-store chain’s sale to Berkshire Hathaway, the holding company owned by Warren Buffett.

In his four-decade career, Ed Bridge has been active in industry groups and other charitable organizations. He has chaired both Jewelers of America and Jewelers For Children, as well as served as a board member of the Jewelers Vigilance Committee. In 2012, the American Gem Society honored Ed and the Bridge family with its Lifetime Achievement Award. He was also vice president of the Jewish Federation of Greater Seattle and chair of the Seattle Victims Fund.

“I cherish the relationships I have with our team and the treasured friendships with our many industry partners,” Ed Bridge said in a statement. “I feel thankful to have had the best mentors and bosses one could ask for in my father Bob Bridge, my uncle Herb Bridge, and Berkshire Hathaway’s CEO Warren Buffett.”