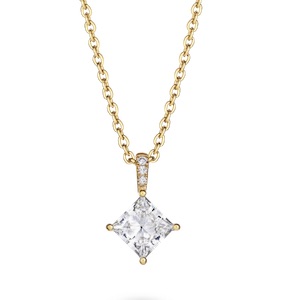 Lightbox, which famously decided not to sell its lab-grown diamonds with grading reports, is now adding some general grading information to the white diamonds it sells that weigh more than 0.2 cts.

Not surprisingly, it’s doing things differently than its peers, part of its ongoing effort to distinguish its man-made diamonds from the natural gems sold by owner De Beers.

For one, Lightbox will follow the GIA model of using general grade ranges, rather than the standard GIA color and clarity scales. For another, the brand will not grade each individual stone, but simply specify their minimum qualities.

And so, starting Monday, its white diamonds will include tech spec cards that state that their color is “near colorless” (from G to J) or better, that their clarity is VS or above, and that their cut is at least “very good.” Those tech specs are also now listed online.

Lightbox chief executive officer Steve Coe says that Lightbox can offer these specifications since it has a “rigorous quality-control process in place.”

The change grew out of consumer feedback, he adds.

“Our customers wanted clarification. They asked a reasonable question: What is the quality of what you are selling here?”

But the brand didn’t feel the need to include anything more.

“We don’t believe it’s worth the extra cost to individually grade each stone. In practice, some could be an H, some could be an I, some could be Js. The manufacturing process makes the diamonds basically identical. There may be a slight difference between them, but we don’t think it will add any greater value to put more information. They all cost the same amount of money to manufacture in the first place, so it doesn’t make any sense to imply that one costs more to manufacture than another one.”

The tech specs will not apply to its diamonds smaller than 0.2 cts., but Coe says that Lightbox’s melee is “of consistent quality.” They will not be included with its blue and pink lab-growns.

When a GIA scientist examined a pair of Lightbox diamonds in 2019, she found they would be most likely be graded G VS1 and that one had an “excellent” cut, the other “very good.”