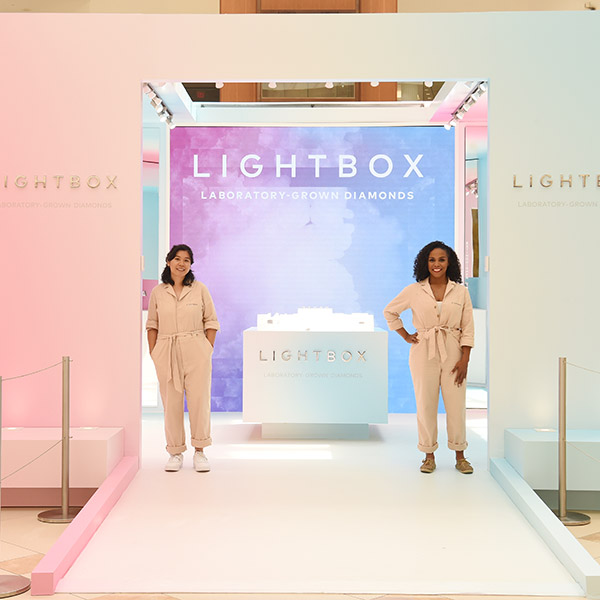 Lightbox Jewelry, De Beers’ lab-grown diamond brand, launched its third pop-up on Thursday in the Aventura Mall near Miami. Building upon its two previous pop-ups—the first at the Oculus in New York City last November, and the second at Westfield Century City mall in Los Angeles in February—Lightbox chose Florida as its next destination for research, marketing, and outreach to customers.

“We decided to focus on the education side of it, to explain to people what a lab-grown diamond is and how it’s manufactured,” said Steve Coe, chief executive officer of the brand. “There are a whole range of technology applications that, I think, most people are not aware of.”

Lightbox’s pop-up is a 400-square-foot cube featuring the latest lab-grown diamond jewelry—a full range of necklaces, earrings, bracelets, and stacking rings—as well as an interactive space where people can learn about the science behind the process. For instance, customers can handle lab-grown diamond discs produced by Element Six, De Beers’ synthetic-producing subsidiary. Element Six has been around for 30 years and has been producing synthetic materials for industrial purposes, long before the material was perfected for gemstones. The pop-up will also be previewing Lightbox’s new fancy cushion-cut, which will be available for purchase in October.

As for the pop-up shops, Lightbox is trying its hand in locations around the country as part of its research on future brick-and-mortar shops. Is a retail rollout in the brand’s future?

“Absolutely, we’re working on that at the moment,” said Coe. “Unfortunately, I can’t say anything today, but we’re hoping to make an announcement in a few week’s time.”

The pop-ups are giving the brand invaluable insight into different markets. For instance, Lightbox is experiencing more success with blue and pink diamonds than it anticipated. Roughly half of online sales are colored stones, said Coe. Customers, unencumbered by the high prices of traditional diamonds, are playing with the new shades, in particular with the stacking rings that, when piled on, can turn into a statement piece.

“We were surprised,” said Coe. “We were always excited by the prospects of colored in the longer term and thought people would be conservative to start with.”

As JCK has also reported, Lightbox, which is currently manufacturing its lab-grown diamonds in the U.K., will open a new factory in Gresham, Ore., near Portland, by the first quarter of next year. It is ramping up to produce 200,000 carats by year’s end for its customers in the U.S. and Canada.

Lightbox’s pop-up shop in Aventura Mall will be open through Sept. 20.