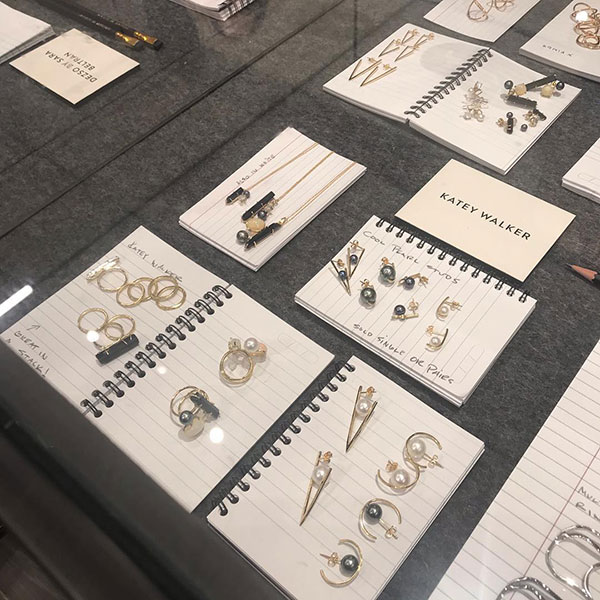 New York City is abuzz with the opening of Hudson Yards, where, as we reported last week, jewelry and watch stores play a starring role in the towering complex’s retail tableau. These largely comprise big-name luxury jewelers such as Cartier and Van Cleef & Arpels, but one boutique, The Conservatory, billed as a gallery-format multibrand concept store, is providing a platform for a number of indie fine jewelry designers, including Eva Fehren, Paige Novick, and Jennifer Fisher.

For one such designer, Katey Walker, The Conservatory’s opening held special meaning—it’s her first-ever partnership with a brick-and-mortar store (select pieces of Walker’s collection are currently available online at Moda Operandi and via her own website).

Walker was introduced to owner and “chief visionary” Brian Bolke (cofounder of the renowned specialty store Forty Five Ten before leaving the company in 2017) through brand consultant Amalia Keramitsis. “Amalia was wearing a piece of my jewelry that he noticed and admired,” says Walker, whose studio is based in Essex, Conn., a historic town on the Connecticut River. “She later shared my line sheet with Brian, and then I met with him to show him my collection in person.”

Walker and Bolke worked together to curate and develop a capsule collection for The Conservatory that’s informed by the designer’s strengths and signatures.

First up: a selection of earrings based on Waker’s pearl studs and hoops, and her Rock Candy series (pictured below) made with jagged quartz crystals that come from Arkansas. Each of these earrings is sold separately and comes in three different sizes. “I really love and enjoyed this approach, as varying the scales of the same design does give each piece a different look and makes it easy for them to be mixed and matched,” says Walker.

“I think Brian really liked the sustainability concept of my jewelry, which is in line with his vision for The Conservatory. He also loves crystals as I do. In fact, I’d purchased a parcel of terminated black tourmaline crystals and brought them with me to our first meeting, and he immediately took to them. So we have some Rock Candy earrings with those black crystals, as well as the clear crystals, an idea that inspired us to include pieces that feature both black and white pearls, a mix of dark and light.”

Pendants and stacking rings round out the assortment, allowing shoppers to customize stacks and layering stories to their liking.

Here’s a peek at some of the pieces on the bench, mere days before they were finished and delivered (by Walker herself) to The Conservatory in time for the launch.

Top: All of jewelry designer Katey Walker’s pieces are handmade from start to finish in her studio in Essex, Conn. A special capsule collection recently made its debut at The Conservatory, one of the most talked-about boutiques to open at Hudson Yards last week. This vignette was created for the store by @willsnotebook in his signature style (image via: @kateywalkerjewelry).