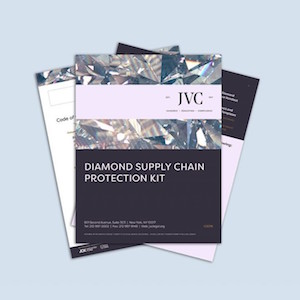 The Jewelers Vigilance Committee (JVC) has released a Diamond Supply Chain Protection Kit (pictured), meant to keep retailers from inadvertently selling lab-grown diamonds as natural and to keep them up to date with the latest government guidance on selling lab-growns.

The kit, sponsored by the JCK Industry Fund and SGL Labs, is available at no cost to anyone who supplies their email here.

JVC president and chief executive officer Tiffany Stevens says that many small retailers are having trouble monitoring their supply chains, while big retailers generally have developed procedures to handle that issue.

“I hate the gap between the elites who have everything covered and other people just trying to figure it out for themselves,” she says. “Most retailers aren’t going to open a lab inside a store. We developed this to be a realistic tool for everyone in the trade.”

To put the kit together, the JVC convened a “brain trust” of big retailers to find out their best practices for protecting their supply chain.

The resulting kit includes template contracts that retailers can customize and have their natural and lab-grown diamond suppliers sign.

“It’s something retailers can use to start a conversation with their vendors,” says Stevens. “Suppliers should be open to these questions and if not, retailers should be buying from someone else. We don’t want people to assume that just because your grandfathers dealt with each other everything is okay in 2019.”

The kit advises retailers not only to ask suppliers if they test their diamonds to see if they are lab-grown, but also to find out their testing method.

“Find out what machines they use,” Stevens says. “And then they can cross-check that with the Assure Program.”

The Assure Program tests diamond verification instruments and was developed by the Diamond Producers Association.

The kit also includes a review of the Federal Trade Commission’s (FTC) revised guidance on lab-grown diamonds. Last year, eight companies received warning letters from the FTC, which claimed their advertising was not following the agency’s recommendations.