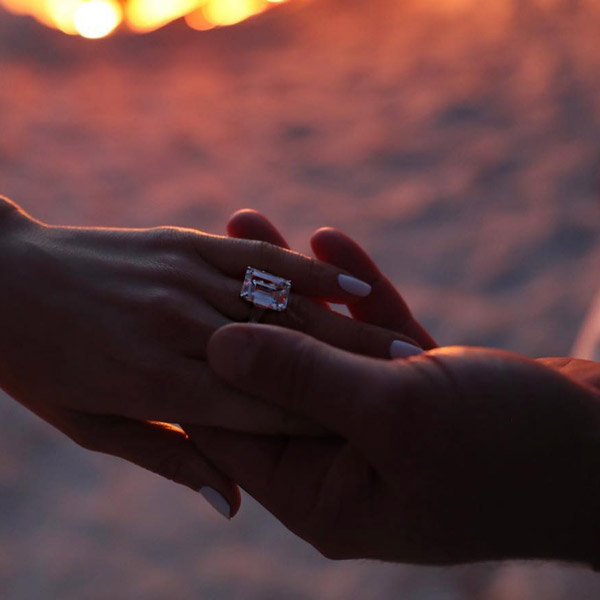 If you have opened Instagram, turned on the television, or logged onto Facebook at any point in the last week or so, you’re probably well aware of the news of Jennifer Lopez’s engagement to Alex Rodriguez. And I’m now just realizing that they both go by names composed of their first initial and first few letters of their last name—J-Lo and A-Rod—so how much more perfect can one couple get?

In all seriousness, it does seem like wedded bliss is in this celebrity couple’s future, though Lopez is no stranger to the engagement—she’s done it five times.

Her first two engagements (and subsequent marriages)—1997, with a marquise cut, and 2001, with an emerald cut—were to men you may have never heard of, and Lopez’s star was still on the rise between those years. By 2001, she was definitely a household name, but I’m not sure how influential she’d be in the engagement ring department when celebrities like Drew Barrymore and Paul McCartney were getting married (not to each other).

So let’s begin with the engagement heard round the world, to the tune of “Bennifer.” Ben Affleck proposed in 2002, with a showstopping 6.1 ct. pink diamond by Harry Winston, valued at $2.5 million today. I remember this news well (though in my memory, the engagement was competing with news of how bad Gigli, their film together, was). Though I hadn’t personally gotten into the jewelry industry yet, this was my introduction to pink diamonds, and I know I wasn’t alone in wanting to know more and maybe obsess/covet/fantasize about one day having my own (I was 16 at the time). Other celebrities have sported pink sparklers since (Blake Lively, Mariah Carey, Victoria Beckham), furthering the public’s interest. While it doesn’t seem as though pink diamond engagement rings are necessarily trendy today (I’d call choosing one a very chic choice, though), we are seeing more of the alternative styles featuring pink stones, such as morganite and padparadscha.

Then there was the Marc Anthony engagement ring of 2004. J-Lo swapped her pink diamond for a blue one, this one in the form of an 8.5 ct. princess cut, also from Harry Winston. This style is harder to emulate. You don’t see a lot of blue diamonds—at least not ones that haven’t been treated—and certainly not in that shape. Lopez did, however, contribute to the demand for a princess-cut ring: During this time, I remember it’s all anyone wanted. Heck, it’s all I wanted. I recently Googled celebrities who got engaged with princess-cut rings, and I can assure you that, after seeing the names, it’s J-Lo who may be single-handedly responsible for our obsession with the princess cut.

Now we come to that glorious emerald-cut sparkler, the one the singer/actress/talent-show judge only recently slid onto her left hand. It’s sensational, and it does have everyone talking. But, as Engagement 101 founder and editor Severine Ferrari points out to me, the cut was already on the rise. “Emerald and step cuts were already on the up-and-up this year, but since J-Lo and Jennifer Lawrence both got emerald cuts, it’s going to boost sales.”

So, do celebrities influence our taste in wedding jewelry? I posed the question to Facebook friends and Instagram followers alike, to the result of a resounding yes—with a caveat. “In style, yes. In size, no,” says What’s On Her Wrist’s Barbara Palumbo, and others agreed. Ferrari also reminded me that Jennifer Lopez isn’t just any celebrity, so I guess the real answer to the question I posed is: It depends on the level of fame a newly engaged person has achieved.

As for my original question, “Has Jennifer Lopez influenced decades of engagement ring buyers?” I think the answer is yes, without a doubt, and I think she will continue to. Retailers, I’d love to hear your take on things.