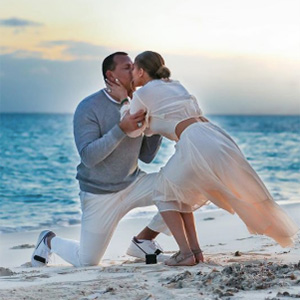 Yesterday, the celebrity couple known as J-Rod (Jennifer Lopez + Alex Rodriguez) revealed to their combined 90 million followers on Instagram that Rodriguez had dropped to one knee on a beach and proposed to Lopez.

We know about the beach, the knee drop, and even that A-Rod was wearing his World Series ring when he proposed—because both superstars posted photos showing the proposal as it happened on their IG feeds.

Page Six reports that Rodriguez slipped a flawless 16 ct. emerald-cut diamond ring worth $1.8 million onto Jenny From the Block’s finger. In the hand-holding, er, big diamond ring photo (which both shared to Instagram), the shank of the ring isn’t even visible, the diamond is so enormous.

A source told Page Six: “Alex had been shopping around for the right ring for the past seven months. He knew for a long time that he wanted to propose to Jennifer. He wanted to get it right.”

The couple was (and perhaps still is) vacationing on the island of Great Guana Cay near Baker’s Bay in the Bahamas—at a resort owned by Mike Meldman and frequented by fellow celebs including Tom Brady and Gisele Bündchen and Justin Timberlake. Reportedly, it’s the first place the couple vacationed together when they began dating.

So who made the ring? We don’t know. Rodriguez reportedly bought both the diamond and the ring “overseas.” And “overseas” is very big place. (Jewelers, if you have any intel on the J-Rod ring, please message me on Instagram!)

Congrats to the happy couple!

Top: Jennifer Lopez and Alex Rodriguez after he popped the big question—captured for posterity on Instagram (image via: @jlo)