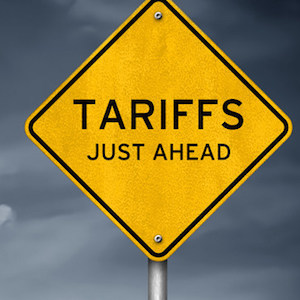 The president’s decision, announced last week via tweet, basically covers all remaining products imported by China that weren’t covered in the first three rounds of tariffs.

Some jewelry items have already been tariffed, including certain gift boxes, jeweler’s balances, beads, and scrap.

The 10% import tax is due to hit on Sept. 1, but the administration has raised the possibility of possibly hiking it up to 25%.

Among the sectors that could be hit hard are lab-grown diamonds. Smaller synthetics are increasingly grown in China, though, like natural diamonds, many are cut in India and may escape tariffs that way.

Esther Fortunoff, president of Fortunoff Fine Jewelry, which has one store in Westbury, N.Y., and a website, says she’s heard from her box vendors that the cost of their items will go up, possibly as much as 25%.

“Twenty-five percent is a lot,” she says, “and in the consumer’s mind, things like boxes and bags are part of doing business. They don’t see that as what they are paying for, but it all goes into the retailer’s costs.”

She adds that with the price of gold also soaring, “I don’t think we’ll be able to pass the extra cost on. Jewelers will have to take the hit in their overall expenses.”

Fortunoff is considering looking for new box vendors but says that will take a lot of time.

Industry groups are also getting anxious.

Jewelers of America president and CEO David Bonaparte said via email that his group has shared its issues with lawmakers.

“If implemented, these latest proposed tariffs could hit jewelers more directly, and the ongoing trade war adds a level of uncertainty for both businesses and consumers,” he added.

National Retail Federation (NRF) senior vice president of government relations David French said in a statement that his group is “disappointed the administration is doubling-down on a flawed tariff strategy that is already slowing U.S. economic growth, creating uncertainty and discouraging investment.

“These additional tariffs will only threaten U.S. jobs and raise costs for American families on everyday goods,” he continued. “The tariffs imposed over the past year haven’t worked, and there’s no evidence another tax increase on American businesses and consumers will yield new results.”

The ongoing trade war has led to a roller-coaster week on Wall Street, but President Trump said in a tweet today that the problem isn’t China, it’s the Federal Reserve, which needs to cut rates faster.

“We will WIN anyway,” he continued, “but it would be much easier if the Fed understood, which they don’t, that we are competing against other countries, all of whom want to do well at our expense!”

Even so, many feel the economy is looking a little more fragile now. Mark Zandi, chief economist at Moody’s Analytics, said the ongoing escalation has now raised the possibility of a recession next year to 55% from 40%.

A recent survey by Shopkick of 30,000 consumers found that 44% said they will shop less frequently in response to the tariffs. Nearly 40% said they have already seen prices increase, and 60% said they will adjust where they shop.

A lot depends on how long the conflict drags on. The Wall Street Journal reported this week that “Chinese President Xi Jinping can ill afford to make [trade] concessions, raising the likelihood of a protracted struggle between the world’s two biggest economies.”

However, the president thinks it’s only a matter of time before America comes out on top.

Four months ago, he tweeted that the trade war will end “much faster than people think.”