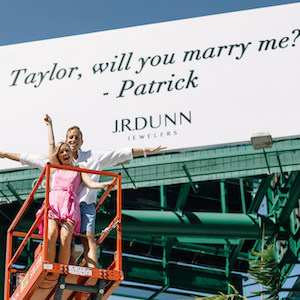 Earlier this year, J.R. Dunn Jewelers sponsored a contest in which the winner would get his proposal posted on a store billboard.

“We wanted to do something that would stand out,” says Sean Dunn, vice president of the Lighthouse Point, Fla. store.

He admits the contest got less entries than expected, perhaps because it involved a bit of a risk.

“I wouldn’t be that brave to publicly put it out there,” says Dunn. “But you figure, most guys, they know.”

Luckily, the person who did win, Patrick, was “super, over-the-top excited,” Dunn says.

Then came COVID-19, which hit Florida hard. The proposal was originally planned for April, then it was put off until June and then was put off again. Patrick finally arranged for it to happen earlier this month during a weekend getaway.

“Patrick was in touch with us regularly through the shutdowns and working on the design of the billboard until finally he found the time that worked for him,” Dunn says.

He eventually came up with an elaborate plan that surprised even Dunn.

“He kept brainstorming,” he says. “He’d say he was going to pull over on I-95. it was scary. That’s our busiest freeway. Then he wanted to hire a bucket truck, and we thought, You’re going to take a bucket truck over the highway? But he kept refining it and refining it, and by the end it all worked out perfectly. That was all him.”

Says marketing manager Jenna Fish: “He was so meticulous about every detail from the proposal day itself to every detail of the week after on their trip down through the Keys. He even flew in different friends of hers from New York, and had her family surprise them in Islamorada. He said he’s been planning it out for over a year.”

The proposal was captured on video (below). It includes the first moment where Patrick popped the question at the Deering Estate in Miami.—shot partially by a drone. The couple had to wear masks until they got to the proposal spot; you can see one fall out of Patrick’s pocket when he takes the ring out. After the two-minute mark, you can see the couple’s bucket truck ride and his now-fiancée Taylor’s shocked reaction when she sees the billboard.

Even though there was a delay or two, Dunn is extremely pleased with the final result.

The video “brought my mom to tears,” Dunn says. “You look at the couple, and to have your name be associated with something so emotional, it’s just great. We thought it stood out.”