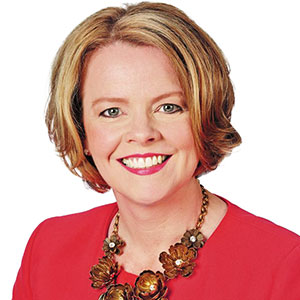 Prior to heading JoAnn, Soltau also served as president of retail chain Shopko and has held senior-level positions at Kohl’s and Sears.

She replaces Marvin Ellison, who resigned in May to head home improvement retailer Lowe’s. She is the first female CEO in the company’s history and its fourth since 2011, when former Apple stores head Ron Johnson came on board for a tumultuous 17-month stint.

Soltau takes the helm as the department store chain once again finds itself in a precarious state. While Ellison is given credit for helping to stabilize the company, it still carries about $4 billion in debt on its balance sheet, according to its latest 10-Q.  In its last quarter, Penney posted a 0.3 percent comp gain and a $100 million loss. Jewelry was singled out as one of its strongest sellers.

Lately, it’s seen a flight of execs from its upper ranks, including chief financial officer Jeffrey Davis and chief customer officer Joe McFarland, both of whom were part of the “office of the CEO” that replaced Ellison.

“Jill stood out from the start among an incredibly strong slate of candidates,” said Paul J. Brown, J.C. Penney board director and chairman of the search committee, in a statement. “Not only is she an established CEO and former chief merchant, her depth of experience in product development, marketing, e-commerce, and store operations has been an important basis for the turnaround work she spearheaded at prior companies.”

Soltau said in a statement: “I am highly passionate about the customer, and I spent my entire career focused on the needs of a value-based consumer by researching, understanding, and meeting her expectations for style, quality, and inspiration.”