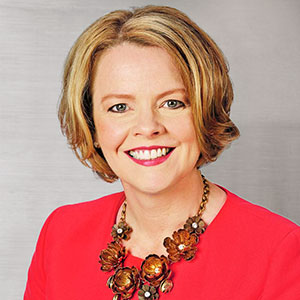 The departure of Soltau, the company’s first female CEO, comes not long after the 118-year-old department store was purchased by mall owners Simon Property Group and Brookfield Asset Management, along with strategic partner Authentic Brands Group.

Soltau will be replaced on an interim basis by Stanley Shashoua, Simon Property Group’s chief investment officer. The new owners will also establish a “temporary office of the CEO to include key members of J.C. Penney’s current leadership team,” a statement said.

Soltau, the well-regarded former head of craft retailer JoAnn, was the company’s fourth CEO since 2011. She replaced Marvin Ellison, who abruptly left in 2018 to join Lowe’s, the hardware retailer.

In May, a controversy arose when, shortly before the company filed for Chapter 11, Soltau was paid a $4.5 million retention bonus by J.C. Penney’s board, in order to “retain and continue to motivate” her, an SEC filing said.

The filing added that 80% of the award would be subject to repayment if Soltau was terminated for cause or resigned without “good reason” before Jan. 31.

A J.C. Penney spokesperson declined to comment on what will happen to the bonus now that Soltau has left the company.

In a statement, the new owners said they are looking for a new “leader that is focused on modern retail, the consumer experience, and the goal of creating a sustainable and enduring J.C. Penney.”

They added that they have “a successful track record of turning around retailers and brands and restoring them to profitability.”

J.C. Penney filed for Chapter 11 in May, and exited the process in December. Cited as reasons for the filing are the company’s ongoing debt burden, the temporary closure of stores due to the COVID-19 pandemic, and its frequent turnover of CEOs.