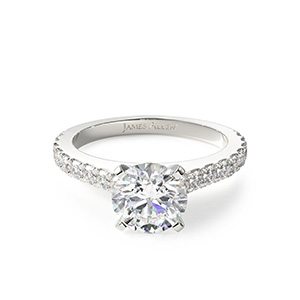 “Signet has always wanted us to be a test environment,” says Oded Edelman, president of the site, which was purchased by Signet Jewelers in 2017. “This is a test. If consumers adopt it, then maybe it’s a sign for the rest of Signet to adopt it as well. We’ll wait and see how it goes.”

In contrast to some of its competitors, James Allen’s offerings will be high color and clarity, he adds.

“We always try to offer the best,” Edelman says. “We pride ourselves on being a high-end jeweler. They are beautiful stones.”

The site will offer the man-made diamonds as an option, but is not branding them in any way or, at this point, doing much to promote them.

“If you brand them, that means you are going to spend a significant amount of money on it, and we are not there yet,” he says.

As with other retailers who are selling lab-growns, Edelman says he worries he could be cannibalizing natural diamond sales.

“It’s always a concern,” says Edelman, who also serves as Signet’s chief digital innovation officer. “We have heard they are a small fraction of the market. We’ll test it, and we’ll see if we can make significant sales. We are not interested in just selling a few diamonds.”

The lab-created diamonds will also be offered at the e-tailer’s first brick-and-mortar store, which opened last year in Washington, D.C.

James Allen is not the only e-tailer who has recently branched out into lab-growns. Last week, Gemvara, a site owned by Richline which primarily sells colored stones, announced it was offering lab-created diamonds as an option for center and side stones. It has offered lab-created colored stones since the beginning of the year.

Among major e-tailers, Brilliant Earth has long sold lab-grown diamonds. Blue Nile still does not, though sources say it has expressed interest.