Dunn and his wife and business partner, Ann Marie Dunn, opened their first store—House of Gems, in Hanover, Mass.—in 1969. The couple moved to Florida in 1977 and, with their son, Sean Dunn, became one of the most successful high-end independent jewelers in the country.

Jim grew up in Braintree, Mass., and his father died when he was just 7 years old; his mother worked double shifts as a visiting nurse to support the family. Money was tight throughout his childhood, and Sean says his dad’s humble beginnings and hardworking mother had a lasting effect on his work ethic, and helped shape him into the caring and kind man he became.

Jim graduated from the University of Bridgeport in 1966, then worked for IBM as a salesman. There, he met the Italian-born Ann Marie. “There are stories of him seeing her walking in a pencil skirt in the office and asking, ‘Who is that?’ ” Sean says with a laugh.

Once in Florida, Jim and Ann Marie quickly became part of the fabric of the community, and established themselves as not only brilliant small business owners, but also generous community philanthropists.

Over the years, Jim and Ann Marie helped launch initiatives for the Boys & Girls Clubs of Broward County and the Humane Society of Broward County, and also supported philanthropic causes that benefited military members, veterans, and first responders, among others.

In 1996, Jim founded Dunn’s Run, a 5k walk/run and 5-mile run benefiting the Boys & Girls Clubs of Broward County that’s raised over $3 million dollars for the nonprofit. The race is well-known in the region, and celebrates its 25th anniversary this year.

Jim also earned several awards during his career, including the Sun Sentinel Co.’s Excalibur Award in 2002 for Small Business Leader. He was inducted into the NSU Entrepreneur Hall of Fame, and in 2015 J.R. Dunn Jewelers was named Luxury Jeweler of the Year in Las Vegas.

But Jim Dunn will be remembered most for who he was: a kind, generous, good-humored, and loving husband, father, friend, businessman, and community member.

“There was no better leader, because he really, truly led by example,” says Sean. “And he did so many [helpful] things that no one was aware of. I’m getting stories now on social media and other places from people he helped over the years. My dad helped someone who needed a repair on their car, he helped someone pay back rent.… I can’t tell you how many people have reached out to me. The guy worked so hard in his business, I think, ‘How did he have the time?’ And he did it all quietly. That was the coolest thing about my dad. He never did anything for the accolades or the glory.”

An only child, Sean entered the family business after his dad suggested he surf his way across the United States (he was an avid surfer) and land at the Gemological Institute of America, where he could earn his gemology degree. “My dad had it all planned in his head. He said, ‘I think you’ll like it.’ He was right.” 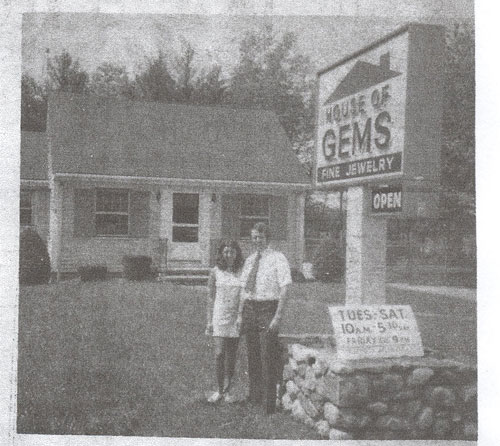 Jim and Ann Marie in front of their first store, House of Gems, in Massachusetts

Jim went to work every day until he was hospitalized. He and Sean shared an office, and Sean notes with a laugh, “You could see the generational differences in our spaces—he would have his calendar and Post-it notes and mail everywhere. And my generation doesn’t use paper much. When I’d leave for a few days you’d see the paper taking over. But I loved working with him side-by-side. He was my best friend, my brother, and more.”

Before his passing, Jim had been strategizing a 6,000-square-foot store expansion with Sean and Ann Marie, and Sean says he and his mom will soldier on with the plans and construction as a way to honor his memory.

He adds, “Someone said to me in the past couple of days, ‘Man, we lost a real one.’ And I knew what they meant immediately. That was my dad. He was real. Jim Dunn was as real as it gets.”

A celebration of Jim’s life will be held in his honor at a date to be announced. The family asks that in lieu of flowers, donations be made to a charity near and dear to your heart or one close to his—the Boys & Girls Clubs of Broward County.