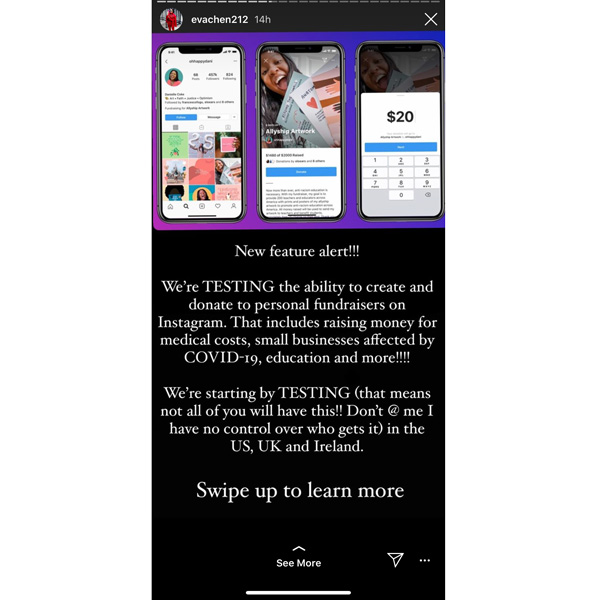 Instagram announced on Tuesday that it is now testing a new feature that would allow its users to raise money for personal causes and charities.

I first saw the news in Eva Chen’s stories, where the director of fashion for the platform listed situations in which the new feature could be used, citing medical costs, small businesses effected by COVID-19, and more.

The feature is in test mode, so it will be limited to a small market for the time being—Android users in the United States, United Kingdom, and Ireland, soon to be followed by iOS users in the same locations. Those users will be able to link directly to a fundraiser on their profile page, either one started by the user or one they choose to support.

Instagram says that it plans to vet all fundraisers to ensure each fits the platform’s list of guidelines and rules, which details the supported categories and causes a fundraiser may support.

Upon approval, users will be able to raise funds for 30 days, whereupon the option to extend the efforts for another 30 days will be offered.

While Instagram covers fees for donations to nonprofits—an option already available to users when they incorporate Donation stickers into their Stories—it will charge fees for personal fundraisers based on the location of the creator.

What caught my eye about this social media update was Chen’s referral to independent businesses during the pandemic. We know so many retailers are struggling, so will something like this help? Perhaps not immensely (though I would suppose it all depends on how compelling your fundraising efforts are), though it’s notable that the option to reach out for help from your customers and fans is now being presented in a way that makes it easy and is incorporated in the one app we all spend far too much time on.

This is also important for our industry given the amount of fundraising it has done for a great many causes during this time. It looks like we’ve gotten along well without it—the jewelry raffles and money-raising events that we’ve seen have been inspiring—but here is just one more place members of our industry can turn to for these efforts.

It’s worth noting that the article from Tech Crunch detailing this update reported that users across Facebook’s platforms have raised more than $100 million for COVID-19 initiatives and causes since January, and that U.S. donations on Instagram have doubled in the last 30 days. This is evidence that people are willing to give if and when they can, so it makes sense that Instagram would make that more attainable.

While this initial test is expected to be small, Instagram is said to be planning an expansion of the feature in the coming months. We’ll certainly look forward to hearing more on this development.