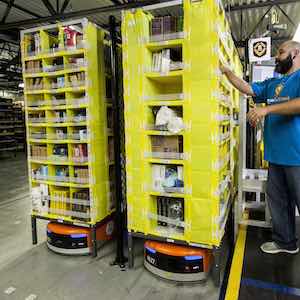 In a well-worth-watching video that’s made waves this week, New York University professor of marketing Scott Galloway sounded the alarm about Amazon, declaring that the e-tail behemoth has grown too powerful, wrecking industries and stifling entrepreneurship.

“Amazon has become an invasive species that is unhealthy for our economy,” he proclaimed. ”They can now perform Jedi mind tricks. It can put out a press release saying it’s looking at health care. No details on what that means … [Yet] the next morning the health care sector [loses] 31 million dollars [in market value].”

Something similar just happened in our industry. Last month, news broke that Amazon had applied for a trademark for an online jewelry brand called For Keeps. Shortly afterward, Signet’s stock fell 3 percent; Tiffany’s, 1 percent. That’s not $31 million in market value. But it’s something.

Of course, just because Amazon filed for a trademark for a jewelry line doesn’t mean it will launch one.

Amazon is well aware “that the media trolls [its] patents and then writes about it,” said Galloway. “Traditional media has been co-opted into being Amazon’s and big tech’s investor relations department.” He pointed out that the company previously filed patents for offbeat ideas like delivery by drone, which garnered tons of media attention but never happened.

Punit Shah, chief marketing officer of e-tailer MyTrioRings.com, which sells on Amazon, believes it does have jewelry in its sights.

“Two vendors inside SEEPZ [Special Electronics Export Processing Zone] in Mumbai have shared they were contacted directly by Amazon,” he says. “In one case, they were asked to produce directly for an Amazon brand and, in another case, to re-create styles made by merchants like us already on their platform. Amazon is definitely planning to launch its own brand and has already made backstage movements to line this up.”

It’s not surprising that Amazon wants its own jewelry brand. Its private label business has become one of its fastest-growing categories, with an estimated $7 billion in annual sales. Its in-house fashion lines have done particularly well; because of them, Morgan Stanley believes Amazon will soon overtake Walmart as the largest clothing seller in the United States.

This won’t be the first time Amazon has targeted jewelry. It launched a jewelry division to great fanfare in 2004.

Monica Stephenson, owner of Anza Gems and a consultant on that effort, was struck by how “analytical” the environment was.

“It’s all based on data and information,” she says. “It’s a retail company, but it’s really a technology company.”

While she was proud of what she and her team accomplished, the end product disappointed her.

“What I wanted it to look like and feel like was very different than what it ended up looking like. I wanted it to be beautiful, very curated, and more of an experience. They wanted SKUs and to emphasize selection and price.”

In the end, the company also seemed unimpressed by the results and quickly moved on to other things.

Shah, whose company once did 50 percent of its sales on Amazon but now does far less, argues that the site will again find jewelry a tough nut to crack.

“They cannot scale experience,” he says. “Millennials are looking for a unique experience—one that caters to their individual needs and is memorable.”

Engagement ring buyers in particular like their hands held through the process. Around 50 percent of Blue Nile’s first-time diamond customers call customer support. “We do about half of our business on the phone,” said former CEO Harvey Kanter.

Oded Edelman, head of rival James Allen, called his site’s service “as warm as a store’s. We have great customer service reps, and most customers call and talk to them for a long time. It’s not just about the ring. We get very personal with our customers. Some people talk about how they met their significant other.”

This would never happen with Amazon, which doesn’t even publicize its customer service number. If you do reach its reps, they don’t provide input on products; there are too many.

Like Walmart, the retail behemoth that it’s overshadowed, Amazon is about price and convenience. Push a button, and the item arrives. Galloway calls it a “search engine with a warehouse attached.”

“There is no room in Amazon’s model for high-touch support or guided product discovery,” says Shah. “Couples need customization, Try It On, rich media, unique payment options, and filters that can take their wedding date into account.”

Jewelry is, after all, an emotional product, and a recent post on Marketplace Pulse argued that Amazon never got the hang of emotional selling.

“There is a difference between shopping for toilet paper and beauty products,” writes Juozas Kaziukėnas. “One is transactional commerce, the other requires emotion. Many then would argue that Amazon is missing this. They do transactional commerce well but have no capacity for emotional brands.”

“We, as human beings, don’t merely shop to acquire products. Not all the time anyway. We also shop to discover new things, to socialize with friends and to entertain ourselves. We shop for the thrill of the hunt and the associated dopamine rush to our brains when we find it. Amazon seemingly has no interest in these less transactional elements. Shopping on Amazon remains a solitary, static and sullen activity: a Sears catalogue on digital steroids.”

Its private-label push might also backfire, he argued, as Amazon uses data garnered by other lines’ sales when launching its own.

“Brands [may] steadily defect in search of less adversarial partners. And without brands, Amazon ceases to be Amazon.”

None of this means the industry shouldn’t pay attention to what the company is doing. Amazon remains the 800-pound e-gorilla of retail—smart, powerful, well-run, and well-financed. “They can overwhelm any sector with cheap capital that no other company has been afforded,” said Galloway.

National Jeweler estimates Amazon’s annual jewelry and watch sales at $800 million a year. Shah, however, believes the actual number is half that—a still-significant $400 million. It is clearly a player in the online watch business, though some of its product is gray market. But watches are well suited for the platform, as they are branded and standardized. Jewelry is less so.

That may be why it wants a jewelry brand. The proposed name, For Keeps, suggests an attempt to evoke something. It calls to mind Keepsake, but with an informal millennial-ish spin. It certainly sounds better than its current brand for private-label jewelry, the generic-sounding Amazon Collection.

Yet at the end of the day, Amazon is still Amazon, for better and for worse.