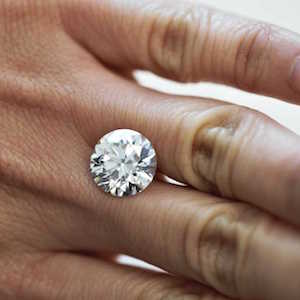 The  company declined to comment on whether Huron now holds a majority or minority stake. However, the press release called the investment “significant,” and said that Huron was “the primary institutional investor” in the transaction. It also noted that CEO Clive Hill and chief technology officer Yarden Tsach will remain “significant” shareholders in the business and will continue to hold their respective roles.

WD, formerly known as Washington Diamond Corp., was founded in 2008 by Hill, the former head of the Fraser Hart British jewelry chain. The public-facing name of M7D Corp., WD holds global licenses for the chemical vapor deposition technology developed for diamond growing by the Carnegie Institution for Science in  Washington, D.C. The Carnegie Institution has been a shareholder in WD since 2011.

“The Huron Capital investment is expected to help us significantly expand our capacity in the fast-growing, high-quality segments of both the gem and industrial markets, and build our base of trade partnerships,” said Hill in a statement. “We believe we can provide the safest supply certainty for this technical product and the most consistent volume option for the biggest players in the gem market.”

Based in Detroit, Huron Capital describes itself as a “an operationally focused private equity firm with a long history of growing lower middle-market companies.”

“Huron Capital is expected to bring expertise to help manage our explosive growth and can also help set our priorities in the scientific and industrial diamond markets,” Tsach said a statement.