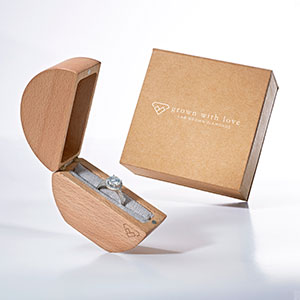 Richline has introduced a new lab-grown diamond brand, Grown With Love, that will be sold at the jewelry departments of J.C. Penney and Macy’s.

The line will include both fashion and bridal components. The Macy’s line will include stones up to 3 cts., while the J.C. Penney line tops off at around 1.5 cts. The center stones in the collection are grown by Washington Diamond Corp.; the melee-size diamonds were produced in China.

Collection prices range from $500 to $10,000. Richline senior vice president of product development Michael Milgrom says there is no formula for how the price of the diamonds in this collection compares to their mined equivalents. “There is no set number,” he says. “It depends on the retailer and their pricing structure. What we can say is that people are getting a larger and better-quality diamond for the money.”

While the lab diamond field has grown crowded of late, Richline says its line will be differentiated by its commitment to education.

“We didn’t just put out a bridal line that looks like everyone else’s and then stuck a lab-grown diamond it,” says Milgrom. “I can’t stress how important education is to this. [Lab-grown diamonds are] an unknown product. They are not inexpensive. We are giving our retailers the most support possible. If you just leave this product in a case and put a sign in it, it’s dead in the water. No one knows what it is or understands it, and the customer understands it even less.”

He says the importance of education is shown by a company video, which recorded customer reactions to a side-by-side comparison of a mined and lab diamond.

“When we started the video, there was not one person who wanted the lab-grown,” says Milgrom. “They all wanted mined diamonds. In just a minute and a half of education, you saw people change their attitudes.”

That change spanned all age groups. “We thought this was just a millennial program,” says Milgrom. “But we were pretty astonished that all demographics were open to it.”

While the Richline release makes the now-standard conflict-free and environmental claims for lab-grown diamonds, vice president of marketing Lindsey Scarlata Woodruff says that the company is trying to be precise with its language.

“We don’t say ‘eco-friendly’ and ‘environmentally friendly,’ ” she says. “There is really nothing in this world that is eco-friendly. The only thing that is truly environmentally friendly is not consuming. We are saying this is a clean tech, that it does reduce the environmental footprint. People are looking at their lives, and they want ways to adopt more responsible practices. Some of those people may never buy mined diamonds, but maybe they’ll buy this.”

Milgrom adds that one reason the two legendary retail names bought into the program is because “we are not positioning one type of diamond against the other.

Milgrom admits it’s unusual for two such big names to commit to a new brand in an untested category.

“It was just being at the right place with the right product,” he says. “We came to JCK Las Vegas with our program all ready. And then De Beers came out with Lightbox, and that was kind of a validation. People were primed to get in this early. And our program was all laid out and turnkey.”

Richline hopes eventually to expand the program to mall jewelers.

“This will expand to other retailers, for sure,” he says. “But when it gets to big-box stores, I’m not sure about the education component. Sometimes there aren’t even salespeople at the big-box stores. Until this becomes a mainstream product, I don’t think this will get to big boxes.”

As far as the future of the category, Milgrom says he’s just waiting and seeing, like everyone else.

“This is something that is not going away,” he says. “It will change the business. What it changes to, nobody knows. We hope this will expand the industry, that it doesn’t take away from any part of it. So one plus one equals three.

“I have been in the business many years, and I have never seen a category come in with such newness and freshness. The jewelry business is predictable. This is unpredictable.”