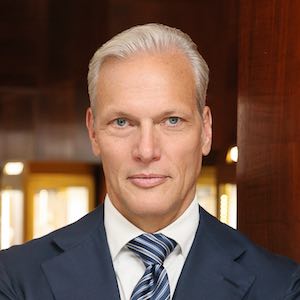 Marc Hruschka (pictured) has been appointed president and chief executive officer of Graff USA, which runs a chain of high-end Graff boutiques in major U.S. cities.

Until recently, the role was held by Thomas Bouillonnec and before that by Meyer Hoffman.

Hruschka has 25 years’ experience in the luxury industry, including stints as president and CEO of Chopard USA, chief commercial officer of John Hardy, and vice president for watches and jewelry at Chanel. He most recently worked as president of strategy and partnerships for retail tech startup Hero.

Graff has 10 locations in the United States, including stores in New York City, Chicago, San Francisco, and Miami.

The company recently made news when it acquired the Lesedi La Rona, a record-breaking 1,109 ct. piece of rough that it transformed into a 302 ct. emerald cut.