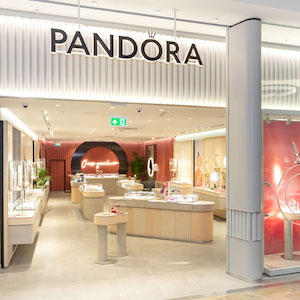 Pandora has cobbled together a stockpile of cash so that it can survive even the worst COVID-19 scenarios, executives said at a conference call following the release of its first quarter financial results.

The new funding includes the negotiated waiver of a loan covenant, a 3 billion Danish kroner loan-facility increase from its banks, and the sale of 8 million treasury shares. It has also suspended share buybacks and trimmed expenses, with its traditional media spending either cut or shifted to digital.

“We don’t believe in a scenario where we go completely black,” said chief executive officer Alexander Lacik on a conference call following the results’ release.

In addition, executives have taken a pay cut, though Lacik said the company has committed to paying its employees for 10 weeks, even if stores remain shut.

Lacik said that once it was clear in January that the coronavirus was becoming a problem in China, Pandora set up a “global crisis team so we were well-prepared in case the virus spread.”

As a result, it has now modeled a variety of scenarios, including a possible second wave of the virus hitting in the third quarter.

“We wanted to be prepared for the worst,” said chief financial officer Anders Boyer. “With the funding package, we have enough cash even if all stores remain closed for the rest of the year.”

All this comes as the company’s financial results for the first quarter were seriously impacted by COVID-19. Overall revenue fell 14%, and during the last week of March—when 80% of its stores were closed—consumer sales dropped 70%. By the end of April, that improved to a bit, to a 55% drop.

During April, online sales swelled 300%, though Lacik thought that’s likely because consumers had no other options.

“How much of that [will] remain once stores reopen, we can only guess. In Germany, the growth in e-commerce didn’t slow down when the stores opened, but I’m not sure that will sustain itself. It’s possible a portion of those consumers will find it was a quite decent experience, and they will stay online.”

The company was also heartened that it posted “better than expected” results in January and February, which it attributed to last year’s brand reset, During the first two months of the year, organic growth increased 1%—in a period when most of its stores in China were closed.

“One percent may not sound impressive,” said Boyer. “But it is a major step considering where we are coming from with negative organic growth and declining like-for-like.”

As for when its other stores will reopen, Lacik noted that Pandora is following the guidance of local authorities.

“We don’t jump the gun, because that would suggest we know more than the authorities, and we don’t. We sell jewelry.”

He thought the timing would vary by region.

Pandora has found that sales have been slow to recover in China, where the company has been struggling in general. (Others have found the opposite.) But the company has been pleasantly surprised by the results from Germany, which seems to be showing a “quick rebound,” Lacik said—though he cautioned it’s hard to make a definitive verdict about what’s happening there, as the country has only been reopened for eight days.

He noted that social distancing rules will likely limit the number of people who can enter Pandora’s stores, which could depress sales. As a result, the company is brainstorming possible solutions to that issue, including new technologies.

In the stores that have reopened, Pandora has seen conversion rates “skyrocket,” even if traffic remains down.

Overall, though, Boyer warned that the second quarter results will likely reflect the global shutdown caused by the COVID-19 pandemic.

“You should expect that revenue will be down significantly in the second quarter, much more than the first quarter,” he said.

When things get back to normal, Lacik said that Pandora plans to continue the expanded marketing activity it began last year.

“This is quite an interesting opportunity to negotiate interesting [ad] rates. We want to be strong out of the gate. You don’t turn a brand around that has been out of fashion for a while on a dime. You need to consistently communicate and consistently be on top of mind of people.”