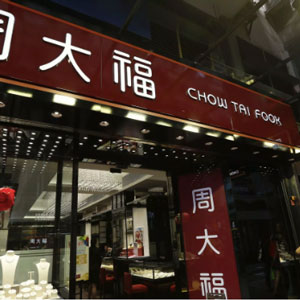 At the end of March, when most of the world was going into coronavirus lockdown, China was slowly emerging from it.

On March 19, the Chinese government announced that the number of new domestic COVID-19 cases had fallen to zero, and it began to lift the social-distancing restrictions that had been imposed on most of the country for more than a month. Though some worry China could still be hit by a second wave—or doubt the virus has been truly conquered—at the moment, the country seems to be stirring back to life.

Kent Wong, managing director of Chow Tai Fook, China’s largest jeweler, says that 80%–90% of CTF’s points of sale are currently open. For most of February, 90% of them were closed.

While sales are still down—and mall traffic has not yet returned to pre-virus levels—Wong says he’s heartened that consumers are still interested in jewelry, even if their current preference runs toward lower-price-point items.

“We assumed that it would take two to three months to recover,” he says. “I think in three or four months, we will back to normal. The present data is better than we expected.”

There have been changes in the consumer mindset, he says. People think more about their health. The big topic on social media is where to go to eat. Tourist sites are flooded.

“People are happy to leave the house,” he says. “A lot of the times when they go to the malls, it isn’t to shop. They are happy just to talk, have tea.”

The tech that people relied on during the crisis has become standard. Videoconferencing is the “new normal,” Wong says. While there was already widespread use of shopping apps in China, they’ve become embraced by even the most stubborn holdouts.

“The older people used to like to go to the market,” he says. “But now that they started using the apps when they couldn’t go out, use of mobile has become common even with older people. They see the convenience.”

Wong says when it become clear the virus would become a serious problem, CTF embarked on a multipronged strategy.

It decided against layoffs. “We believe in the mid- to long-term, this business will come back,” Wong says. “And we believe that our people are our best asset.” (Its executive directors and board did take a 30% pay cut.)

It prioritized communication. “We set up a nationwide information hub led by the risk management team so we can update employees day-to-day,” he says.

On web chats, management discussed how the company planned to make it through the crisis. “We encouraged [workers] to think about the future,” he says. “We said, we are suffering now, but we are optimistic long-term and we have to think about that.”

It initiated a working-from-home program. Many of CTF’s store associates were already communicating heavily with customers via text. It developed new apps to help them connect more.

It also invested heavily in digital marketing and events.

In February and March, CTF held more than 20 livestream events featuring influencers and celebrities. All told, the events attracted upward of 20 million views.

The most successful of these was the special Stay Safe pendant, part of its popular Bao Bao Family Cherry collection, with proceeds going to charity. All 5,000 pieces sold out within 30 seconds.

Finally, it created a learning-from-home program.

“We raised different types of topics and let people discuss them,” Wong says. “We thought it would be good time to rethink and reimagine the business. We got our people to think about what they would like to do after the quarantine.”

“As we’re all remote working, we have time to do the things we have always wanted to do without all the interruptions of day-to-day business. We are talking about ways we can fast-track any project that we are working on, so that when we emerge, we are a different company.”

The industry should also use this time wisely, she says.

“This is our chance to really reinvent ourselves. We have been so slow as an industry to adapt. Many jewelers don’t have the platform to show their merchandise online when people aren’t going to the malls. Those stores that do will be able to pop back faster.

“[This crisis] is going to change retail. We have two months to work on things that will help modernize our business. All of us have to make that our priority.”

She also advises to retailers to do a “deep dive” on their inventory and make sure they have the right product. If post-lockdown Chinese customers have been favoring lower price points, U.S. consumers might do the same thing.

On the plus side, she notes that, for many years, one of jewelry’s biggest competitors has been luxury travel. And that industry will likely face even more challenges than jewelry.

Wong agrees the industry needs to focus on the bigger picture.

“We are facing a difficult time, and we need to unite together. We need to think about how we can maintain customer confidence. Don’t lose yourself in this difficult time. Think about the future. What do we need to do with the consumer? How will their behavior change? How can we take action to do the right thing?”

As someone who has lived through lockdown and (hopefully) come out the other side, Wong has simple advice for his colleagues who are still hunkering down: “Stay inside, stay healthy, and stay positive.”