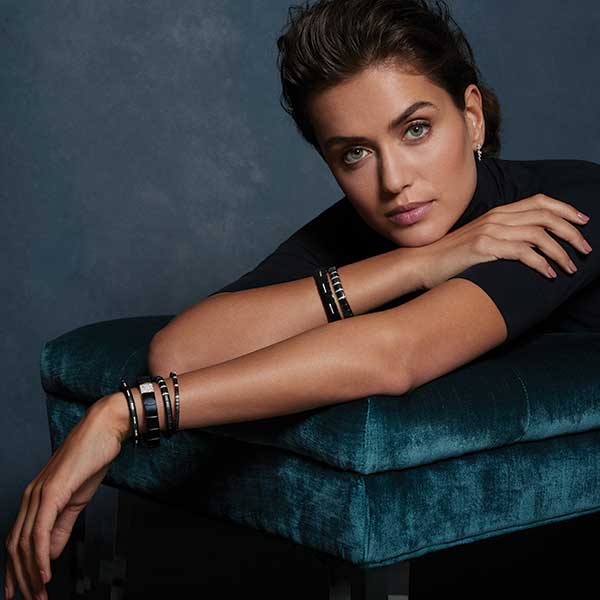 Sometimes it’s hard to know where to spend your holiday marketing budget—ROI is such a nebulous concept, especially when industry pros say you’re better off measuring success by consumer brand awareness and engagement versus actual product sales.

But sometimes you just have to go for it, investing time, resources, and yes, dollars, in the creation of a campaign with high production value to get customers and followers really excited about your holiday jewelry offerings.

When some small businesses dip a toe into commercial advertising it can sometimes look like this, so it’s refreshing to see how Greenwich St. Jewelers co-owner Jennifer Gandia rallied her troops to go all out for holiday 2018. “We felt it was time for us to begin owning our creative voice and visual position as an independent retail brand,” she says.

“The goal was to let consumers see how we envision jewelry enriching everyday life,” says Gandia, who art-directed the shoot along with staff graphics pro Leah Bird. “We wanted to show how fine jewelry can transition from the boardroom to brunch and from a gala to the grocery store. So we created our idea of the GSt. woman and showed her living her best life.”

On set, “the GSt. woman” was played by model Talia Richman. “She walked into the studio the morning of the shoot dripping in her own jewelry, and that’s when we knew that the universe had aligned us with the perfect face for the campaign,” says Gandia. “She’s an insatiable jewelry lover, so we had a ball playing dress up with her all day.”

Richman was just one member of the talent Gandia assembled to bring the campaign to life. She hired producer Caroline Yi, who has done work for Saks Fifth Avenue and Cole Haan, to curate a top-notch creative team led by photographer/director Hao Zeng.

“We have done campaigns for holiday in the past but focused on product shots only,” says Gandia. “Since this was the first time we were investing in a shot of this magnitude and expense, there was a certain amount of expectation and stress,” says Gandia. “And I’m happy to say, we are thrilled with the results.”

The Greenwich St. Jewelers holiday campaign appears in its entirety as an online lookbook, and campaign assets will appear on the company’s social media, in a printed catalog mailed to top clients, and other touch points throughout the season.

“We now know that this wasn’t a ‘one and done’ initiative,” says Gandia. “It’s challenged us to continue to evolve our creative visual communication and brand building as we look in to 2019.”