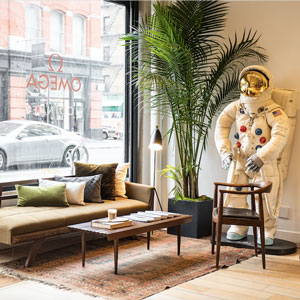 The pop-up shop, located at 274 Lafayette St. in SoHo, debuted Thursday night and features a collection of new Omega watches (all for sale) and an exhibition of historical timepieces from Omega’s museum in Switzerland.

The Hodinkee Shop—Hodinkee’s e-commerce retail platform—also began offering new Omega timepieces to its consumers last night. There are currently 24 models for sale on the site: Speedmasters, Seamasters, Constellations, and De Villes. Prices range from $4,950 for the De Ville Prestige Co-Axial Power Reserve 39.5 mm to $12,000 for the Speedmaster Moonwatch Co-Axial Chronograph 44.25mm Dark Side of the Moon watch.

Omega is a huge get for Hodinkee—and not just because it’s a big-boy luxury Swiss brand. Hodinkee’s founder, Ben Clymer, launched the platform in 2008 based on his fascination with his grandfather’s Omega watch—which he began casually blogging about (see JCK’s profile of Clymer here for Hodinkee’s origin story).

“What really started my interest in the subject was a watch that was gifted to me by my grandfather, which was an Omega Speedmaster MK40,” Clymer said in a prepared statement this week. “When we marked the 10-year anniversary of Hodinkee, it was Omega who we partnered with to pay tribute to that specific timepiece. To be able to have Omega now as a commercial partner is an honor.”

Hodinkee introduced its shop in 2012 on the strength of its reputation as a concisely written, insider-feeling media outlet for watch news and commentary. And its audience of young, watch-obsessed consumers followed.

Initially, the site sold watch straps and other small accessories but has since grown into an authorized retailer for several collectible watch brands, including Oris, Hamilton, Grand Seiko, and TAG Heuer.

Top: The front window of the Hodinkee Omega pop-up shop (all photos courtesy of Hodinkee)