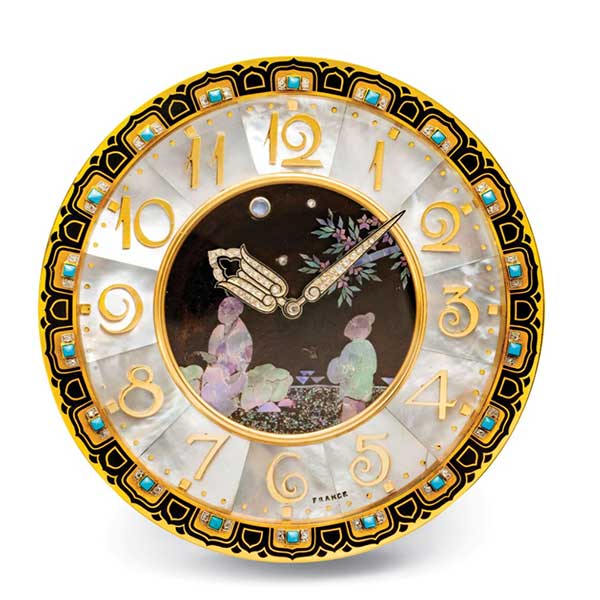 The obvious way to get a feel for the goods up for grabs in an auction is to browse the lots and accompanying literature. But in the case of A Lifetime of Collecting—101 Cartier Clocks, currently on at Christie’s Geneva and ending Tuesday, there’s an even better resource to fully grasp the rarity, craftsmanship, and ingenuity of these remarkable clocks spanning the belle epoque and art deco eras, among others.

Enter Francesca Cartier Brickell, sixth-generation descendant of the Cartier family and author of The Cartiers (reviewed on All That Glitters earlier this year). Her recently recorded  A Journey Through Time: The Cartiers and Their Clocks webinar is a lively, informative, and lavishly illustrated overview on the topic that makes the idea of these decorative treasures gracing your mantle, desk, bedside table, or curio shelf completely irresistible.

Speaking from the library of her late grandfather Jean-Jacques Cartier’s house in the south of France (where Brickell discovered an archive of designs, letters, and ephemera in the wine cellar in 2009—the impetus for writing her oeuvre on the family’s legacy), she says:

“Timepieces were a really important part of [the Cartier family’s] creativity but also the business. Each clock, as with each [piece of] jewelry, was worked upon by many, many specialists and, like the jewels, they were impacted by the fashions of the time.”

Cohosted with Marie-Cécile Cisamolo, a jewelry specialist at Christie’s Geneva, the talk is accompanied by live demos of several clocks from the auction—all 101 are still ticking as it were.

This includes a clock (the second example below) with radium-painted hands that, as Cisamolo shows on camera, responds to a Geiger counter. “When they are made with the original radium, it actually adds value because [the radioactive material] is quite rare,” she says.

Each clock in the auction uniquely reflects the Cartier mantra of “never copy, only create” and also the idea, says Brickell, “that you should be continually innovating.”

Cartier’s famous mystery clocks are the consummate example of this, and while there are none in the auction (they are exceedingly rare), there are a few “semi-mystery clocks.” These are often characterized by a round or angular case with two superimposed dials and day-night indicators. The main distinction, says Cisamolo, “is that they are not transparent.”

There are also 10 clocks designed by master clockmaker Maurice Coüet, whom Louis Cartier hired in 1911. “Louis could see that he was brilliant,” says Brickell. Coüet was  fascinated by Jean-Eugène Robert-Houdin—the father of modern magic—and incorporated the latest technological advancements into his designs.

Cartier’s decorative clocks had become the gift of choice among royalty and aristocrats and were often inscribed with personal messages. By 1919, Louis had established a clockmaking workshop in-house under Coüet’s leadership. It employed 30 craftspeople, including stone setters, lacquer artists, and enamelists.

Very fine examples of the guilloche enamel clocks are well represented in the Christie’s auction in the most beguiling display of yellow, green, purple, rose, sky blue—an entire rainbow of options.

Brickell explains in the webinar that Louis’ trip to St. Petersburg, Russia, in 1910, including a visit to the Fabergé workshop, was highly influential in this regard, resulting in clocks that “evoke Romanov splendor and opulence.”

Some of the clocks are quite small—teeny-weeny fairy-size things that were intended to accompany travelers on their grand tours. Others rather charmingly ding and chime at certain points during the hour, like a kind of spirited, otherworldly greeting from the individual who made the mechanism possible once upon a time in a Parisian atelier.

Watch the recording of Brickell’s webinar while you can (it will disappear when all the bids are in). In the meantime, here are a few examples of the magical marvels you might acquire.