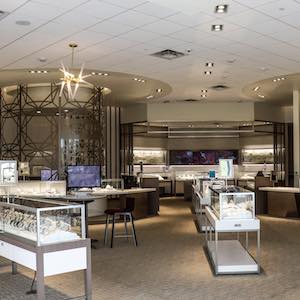 Helzberg Diamonds has given seven stores a next-generation format, which showcases a variety of new digital features, including letting consumers try on rings using augmented reality.

The newly formatted stores—two of which have just opened and five of which have been converted from the chain’s traditional format—debuted before the Christmas holiday. They feature wafer-thin digital signs that broadcast messages both inside and outside the store, the virtual ring experience with augmented reality, a station where customers can custom-design rings and receive presentations on the Four Cs, and revamped diamond rooms with 24-inch video screens that let consumers view their ring’s light performance using American Gem Society ASET technology.

“Our goal was to evolve our store design and create a noticeably different and relevant environment,” says Mitch Maggart, Helzberg’s chief store operations and real estate officer. “It looks very ‘right now,’ it is interactive, and it is a fun experience. We wanted to evolve the store experience, but at the same time we didn’t want to alienate existing customers. We wanted it to look like retail needs to look today.”

The most intriguing addition is the virtual ring experience, which is built around a double-sided tablet embedded in a table. After customers pick one of more than 100 ring designs on the tablet, they can place their hand under it and see a live 3-D image of how the ring looks on their finger. It will also determine their ring size.

From there, they can take a picture of their virtually ringed hand, which they can email to themselves or share on social media.

The technology, which Helzberg built from the ground up with the help of outside vendors, is designed to be used with or without a sales associate. The technology can be seen in action in the video below.

Helzberg currently has more than 200 stores. While the company hopes to expand the next-generation format, it doesn’t know if this new format will become standard.

“We will evaluate which elements of the store work,” says Maggart. “Like any prototype, we will make tweaks to the design. We certainly plan to move forward with elements of it. It’s hard to say if we will roll this out to all our stores. But we are very encouraged by this design. I think it has tremendous potential for us.”

The seven next-generation stores are located in Glendale, Calif.; Sacramento, Calif.; Wilmington, Del.; Roseville, Minn.; Greenville, S.C.; Arlington, Texas; and Fort Worth, Texas. Two of them are in off-mall locations, and five are in malls.

“I will tell you being on the real estate side of the business, malls are changing. I think that all the developers have come to the conclusion that the malls need to be experiential. Having some digital presence is very common now.”