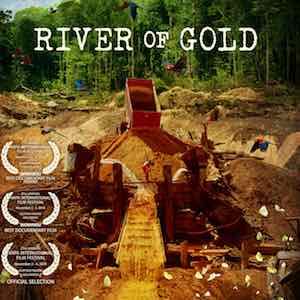 One unusual session at NYC Jewelry Week in November was a screening of the documentary River of Gold. Narrated by Academy Award winners Sissy Spacek and Herbie Hancock, the 63-minute film tells how a sudden rush of small-scale gold miners—almost all using mercury—are seriously endangering the rainforest in Peru’s Madre de Dios region.

The film will be released for free online in March, backed by a public relations campaign. It is currently touring at different educational institutions.

The film’s codirector, Sarah duPont (pictured below), who is also the founder and president of the Amazon Aid Foundation, talks to JCK about why she got interested in this topic and what the industry—and consumers—should do about it.

JCK: Why did you decide to make this film?

DuPont: I started going to the Peruvian Amazon with a bunch of well-known scientists, with the goal of preserving this really important area of Peru. It has some of the highest numbers of biodiversity in the world. As the world heats up from climate change, all the species need to be able to migrate to higher places. It’s become a super-important migratory corridor.

Then 9/11 happened, and the price of gold shot up from $250 an ounce. About 70,000 miners moved into this area and started to poison it with mercury. I got the idea to start producing multimedia to educate people about what is happening in the Amazon. The film touches on these aspects through the lens of gold mining.

What did you learn about gold?

About 15 million–40 million [people] work in the global sector. Mercury is involved, which makes it even more serious. There are a lot of illicit activities associated with it. You’ve got the Mafia, you’ve got money laundering, child slavery, you have the whole shebang.

What do you feel needs to be done?

It’s not about boycotting gold. There are a lot of people in the sector. I believe we need to formalize and regulate the small-scale mining sector. We need to have a responsible and transparent supply chain for gold.

There’s a lot of discussion about what’s the best way to get gold to market, Fairtrade, Fairmined. But it’s very hard for some of the miners on the ground to get that certification. Everyone needs to have a more aligned mission. How are we are going to let these vulnerable poor miners get their gold to market in a way that isn’t that hard to do?

What kind of communications are you giving to consumers?

The language that you use has to be really well thought out. We are looking at exactly what we should say. It’s not a black-and-white issue. The learning curve for me was pretty steep. When I first started this project, it was all about the Amazon, and then I saw what is happening with these vulnerable populations. So, it has to be done very carefully. The messaging has to be careful not to demonize the miners.

A lot of companies use recycled gold, and say that’s an answer. Do you agree?

No. It can be an answer. It does help, but also recycled gold can be problematic. You can take a bar of gold that is newly out of the Amazon, cut a piece of it off, and say it’s recycled. Recycled is a good thought, but there needs to be a structure of what it means to be recycled.

Some argue that if everyone uses recycled gold, that will eliminate problematic mining. Do you agree?

There is plenty of gold out there to recycle, yet mining is on the upswing. So, it doesn’t seem to be an answer to the question.

What reaction have people had to the film?

I have people say everything from, “I’m never going to buy anything gold again” to “What can I do to protect the Amazon?” The film was made to appeal to many different groups. It was also made to be shown in the classroom. We have 200 pages of curriculum built around the film.

What do you think members of the industry need to do?

They need to be aware of the issue and to organize to actually take positive, realistic steps to produce a clean supply chain for gold. Education is key, awareness is key.

There are a lot of good people that are working in the space. It’s a complicated situation. There are so many people working on it, there doesn’t seem to be a fused approach. That is what needs to happen.

There are solutions and we need to take realistic steps to get there. It’s not acceptable that these pieces are made out of love and for love. There’s such a dichotomy of where some of this gold comes from, which just does not gibe with what the jewelry industry is trying to do. Gold mining is one of the most destructive things to our forest, because of the mercury.

People are really starting to pay more attention to what is happening to our planet. I am giving the jewelry industry a loving challenge to really dig deep and find some working solutions.

[The film’s website includes a tool kit for jewelers concerned about improving their gold supply, as well as a Clean Gold Buyer’s Guide for consumers.]