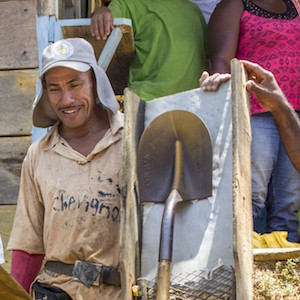 It’s the ethical jewelry version of Who Wants to Be a Millionaire?

The Mercury Free Mining Challenge wants to award a $1 million prize to anyone who can provide artisanal gold miners with a reliable, cost-effective alternative to using mercury.

Designer Toby Pomeroy (pictured below), the Oregon-based nonprofit’s founder and chief executive officer, admits it doesn’t have $1 million to offer yet—though it hopes to have it scraped together by the next Tucson Gem Show or, at the latest, next year’s JCK Las Vegas. Pomeroy is talking to the leaders in the industry and has found them receptive.

“They like the idea, but they all want to see who goes first,” he says. “It’s a risky commitment for a company to want to solve a problem that most people don’t even know exists.”

The issue is clearly serious. About 20% of the world’s gold is produced by an estimated 14 million–20 million artisanal miners. Like their peers in the diamond and gem industries, they are often desperately poor and use rudimentary tools and chemicals. They rely on mercury because it bonds with the gold and helps extract it from the ore.

In many countries, mercury isn’t legal, and miners have to buy it on the black market. It’s also dangerous, not only for the local environment—it sometimes gets in the soil, air, and streams—but to the miners themselves.

“It’s one of the leading neurotoxins in the world,” Pomeroy says. Often “the miners don’t use protective gear. They can’t afford it. They are just doing what their parents did and their parents did. It’s part of their culture. But over time these people are being poisoned.

“I met a woman and her husband [who mine] in Colombia. She said, ‘I’m going blind, and my husband is blind. But there is nothing else we can do.’ ”

“You have to know the cyanide chemistry and have the means to use the chemistry,” he says. “These people are living hand to mouth. They need to sell their gold to eat in so many cases.”

And so his group, now chaired by former Gemological Institute of America president Bill Boyajian, seeks a better way. Its prize will be awarded to whomever discovers a cost-effective solution to this problem, which could be anyone from a lone scientist in a garage to a mega-corporation.

“The answer might be a safe cyanide process,” says Pomeroy. “It could be something that’s confoundingly simple.”

And while the inventor will retain rights to their process—which could potentially help large-scale miners, too—they must agree to allow it to be distributed among the artisanal population. (That would present a huge challenge, which the group doesn’t have to worry about right now.)

Pomeroy first got interested in this issue when he read about the No Dirty Gold campaign. He initially championed recycled gold but came to realize relying on that only scratched the surface of the problems in the supply chain.

“I became aware this would not make the difference I was seeking. What was needed was responsible mining. We can’t just stop mining gold. What about those 20 million people?”

He admits the world hasn’t focused on the issues in gold mining the way it’s looked at the issues in diamond mining. But he notes that Johnny Depp is starring in Minamata, a film about mercury poisoning, which is set to be released next year, and could raise awareness.

And even if it doesn’t, he believes that solving this problem, before the rest of the world knows about it, would be beneficial not only for the miners involved, but also for the entire industry.

“The jewelry industry isn’t overrun with wonderful stories right now,” he says. “Our industry has always been about bling and rarity, but we need to tell the story of who mines [our products] and our concern for them. You go to grocery stores and they have huge posters of where their products came from.

“We can no longer be opaque about our sourcing and our processes. So instead of saying, ‘Those poor people down there, we wish they had it better,’ we look at the supply chain as a family. If we start to take care of and be concerned about everyone in it and let them know they matter to us, it changes everything. We become an industry of compassion and concern.

To find out more, visit MercuryFreeMining.org.